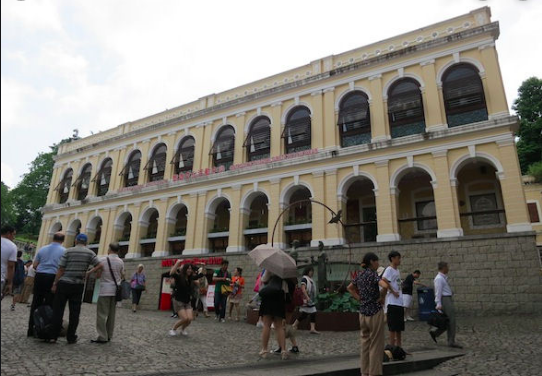 Future Bright Holdings Limited, a food souvenir business owned by legislator Chan Chak Mo, recorded a total of HK69.4 million (US$8.85 million/MOP71.5 million) in losses in the first half of this year, a 366 per cent year-on-year increase when compared with the same period of last year.

This loss increase was mainly attributed to the net fair value loss of HK$21.1 million derived from the 6-storey ‘Yellow House’ commercial building near the St.Paul Ruins.

Future Bright recently announced it has entered into a tenancy agreement with an undisclosed independent third party as tenant, for a period of eight years from the commencement of the tenant’s business or end of the rent-free period, whichever is earlier.

Losses in food souvenir business of some HK$8.1 million; and a loss from written off of property, plant and equipment of some HK$1.7 million derived mainly from the closure of the Group’s Japanese restaurant in Guangzhou were also mentioned

According to the Future Bright’s interim result, for the six months ended June 30 of 2019, the company’s revenue was up 4.4 per cent year-on-year to HK$563.5 million, a rise mainly attributable to the growth from its restaurants in Hong Kong and Taiwan.

In the first half of year, the company’s restaurants, food industrial catering business, and food souvenir business had dropped by 3.3 per cent, mainly due to a drop in turnover from restaurants in Macau and Mainland China, as the restaurant chain business has under-performed against the increased level of visitor inflow to Macau.

The group’s management expects the operating environment in the second half of 2019 to be ‘tough and competitive’ due to the recent trade and currency disputes between China and the United States would pose a threat and uncertainty to the global economy.

The group would remain to be cautious and prudent in opening any new restaurants in the Greater China area, and management is also to tap on overseas distributors to distribute its food souvenir products in the overseas markets.

Future Bright is also negotiating the sale of all or controlling interest in a subsidiary that owns the Hengqin Land where the group intended to develop its Future Bright Food Plaza, with the assets expected to be sold within twelve months.

The project, which broke ground in 2017, is expected to be completed by 2020-2021 with Future Brightholding a 40-year lease with the Zhuhai Government.

The total project cost was estimated at HK$1 billion with the gross floor area of the project 50,000 square metres and set to feature up to 50 restaurants and food shops.