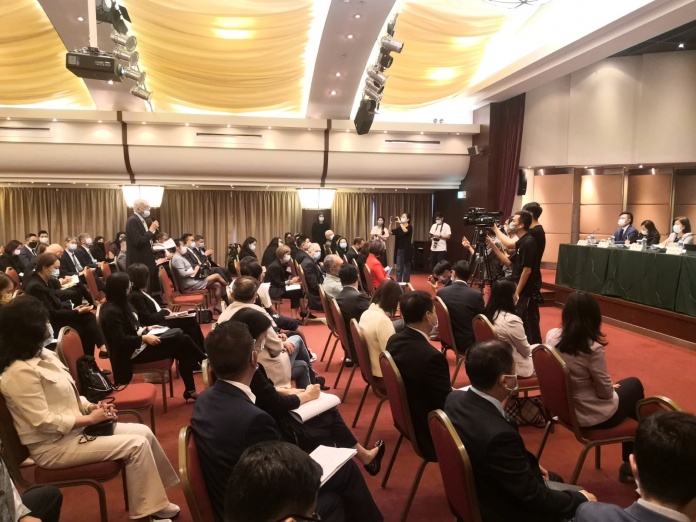 Representatives from gaming concessionaires used the only gaming law revision public consultation session reserved for the sector to praise the proposed changes while asking for further details, while members of the junket operator sector opted to question the need for stricter illegal deposit penalties and even if government assistance will be provided to assist in debt collections.

The 45-day public consultation on the new gaming law revision was launched on September 15 and will last until October 29, with only one session for members of the sector and four sessions open to the general public.

The proposed changes to the gaming law enforced in 2001 focused on areas of social responsibility, non-gaming development, strengthening government supervision and strengthening penalties for violations.

The main representatives from the Macau government side included Gaming Inspection and Co-ordination Bureau (DICJ) Director, Adriano Ho, and head of the Secretary for Economy and Finance Office, Ku Mei Leng.

Kwok Chi Chung, President of the Macau Association of Gaming and Entertainment Promoters, asked for more details on the proposed criminal penalties for the practice of operators taking cash deposits from the general public, which is already illegal in the territory, as well as the working relationship between junket operators and gaming operators defined in the consultation document.

In the proposed gaming law revision, local authorities suggest a possible five-year prison sentence for illegal deposits made in VIP rooms by players and to hold concessionaires more accountable for the actions of junkets operating under their roof.

Kwok suggested the government could think of ways to legalise the practice of junkets taking capital from the public for running operations “under strict government supervision”.

“In the past 20 years there has been some negative news about the junket segment, I personally agree there could be more supervision,” he says, adding the gaming law revision could be beneficial to the junket investors and operators as they could have “a better image”.

“As long as you don’t break the law I think it would not be a big deal for us with more government oversight.”

Meanwhile, a representative surnamed Chan from one of the biggest junket operators here, Tak Chun Group, also questioned the increase in criminal penalties for the practice of operators taking cash deposits from the public.

The representative also expressed his woes over the predicament of junket operators in the consultation session, especially difficulties in debt collections

“We have faced great difficulties in pursuing gaming debts in Mainland China even with court orders,” he said.

“As the authorities are committed to the healthy development of the industry, is it possible for the [SAR] government to coordinate with the mainland counterpart to make it easier for us to pursue debts in the mainland?’

“We have some gamblers from Southeast Asia that will give us money first before arriving in Macau for gambling. Is this also regarded as the illegal practice of cash deposits?” he added

He also suggested there could be a central database shared among operators about those who have borrowed credits from them, a proposal repeatedly made by the sector to authorities in recent years.

“This could ensure the healthy and stable development of the industry” as junket operators could know identify could not settle their debts before lending credits to anyone, he explained.

Addressing some of these questions, the Head of the Secretary for Economy and Finance Office, Ku Mei Leng, only expressed that the proposed revision did not specifically target any segment of the gaming industry.

In an interview with the Hong Kong Economic Journal, Suncity Group’s chief executive and a director were cited as saying that suggested the proposed stricter regulations for the city’s junket operators were not aimed at pushing junkets from the local market but to clearly differentiate between deposits made for gambling purposes and deposits made as an investment.

No representative from what is believed to be the largest junket group in the SAR made any question or statement during the public consultation session.

The Big Six speak up

As for the gaming, operator side, all representatives from the six gaming concessionaires praised the need to update regulations and the role of the gaming industry in developing the city’s economy, while making open requests for more details to be provided concerning the law’s proposals.

Acting as SJM’s representative, lawyer Rui Cunha, advised that the future concession time provided should “take into consideration the investments made and those that will come”.

The language used by Macau authorities in the document seemingly implies that the current 20-year term plus 5-year extensions is considered too long and could be reduced.

“Such investments need a return and a short timeline could discourage investments in Macau,” Cunha noted.

The government also recommends that operators must meet certain requirements and obtain government approval before distributing profits, no matter whether it be in cash or shares, and the percentage of shares owned by the local Managing Directors should increase from the current 10 per cent minimum.

The public consultation document also expresses intentions to increase oversight by authorities on gaming operators operations, dividend distribution, and the percentage held by Macau residents, with the government proposing for official delegates to be appointed to oversee concessionaires.

“We will need a clear definition which employees need to carry out a suitability evaluation and further information on the criteria used to define the new minimum capital requirement […] Since at this moment most shareholders are out of Macau, the need for Macau resident shareholders should also be clarified,” Cunha added.

Meanwhile, Galaxy Entertainment Group (GEG) Senior Vice President for Public Relations, Buddy Lam, expressed that the group “supports and agrees” with the suggestions laid down in the consultation document, concerning the social corporate responsibilities the gaming operators must bear and the development of more non-gaming offerings of Macau.

“In regards to the number of gaming concessionaires, we agree with [what the government said] quality is more important than quantity.”

Concerning the length of the future gaming license, he said the government could look at the practice in other Asian and international gaming jurisdictions in addition to looking at the needs of the city.

“The government could strive a balance among the stability of the job market, the needs of operators like the time they need to run the business for an expected return, and the fact that the government could be able to constantly review the development of the industry,” he said.

“The Macau gaming industry is a highly regulated segment, and we always need to work with different government departments…, leading to the high transparency of the sector,” he said.

“We’re welcome to any appropriate measures to further improve the oversight of gaming operators, junket promoters and other collaborators.”

“We also look forward to more details [about the consultation document], for instance, whether introducing a government representative [in the operators] could have some potential impacts on the industry.”

He said the revision of the gaming law could be done in accordance with the needs of the industry, the city’s position as the global tourism leisure centre and the development of the Guangdong-Hong Kong-Macau Greater Bay Area, as well as the regional market competition.

The company is confident that “a balance could be reached between national interests and the demands of operators” about the gaming law revision, he said.

The accumulated investments of GEG in Macau has totalled over MOP50 billion as of now, and the company pledges to invest another MOP50 billion for the development of Phases 3 and 4 of Galaxy Macau that will focus on non-gaming offerings, he added.

After the session was concluded Wynn Macau Vice-Chairman and Executive Director of Wynn Macau, Linda Chen, stated that the group considers any new law or regulations as “positive as long as they are clearly defined”.

“It is beneficial to the development of the industry as it could enhance the transparency [of the segment].”

Commenting on the fluctuations of gaming stocks in the past week after the unveiling of the gaming law consultation document, she only expressed the company was “optimistic towards the long-term development of the sector.”

The perceived increase in government control of future concessionaires led to a sell-off in gaming operators stock that erased more than US$19 billion in market value from Macau casino stocks over two days.

She also noted that the firm is looking forward to how the gaming operators could help develop the non-gaming offerings of Macau with the recent inauguration of the Guangdong-Macau In-depth Cooperation Zone in Hengqin.

Members of the sector are also allowed to file written enquiries and suggestions to authorities during the public consultation, with authorities then having 180 days to present a finished report.