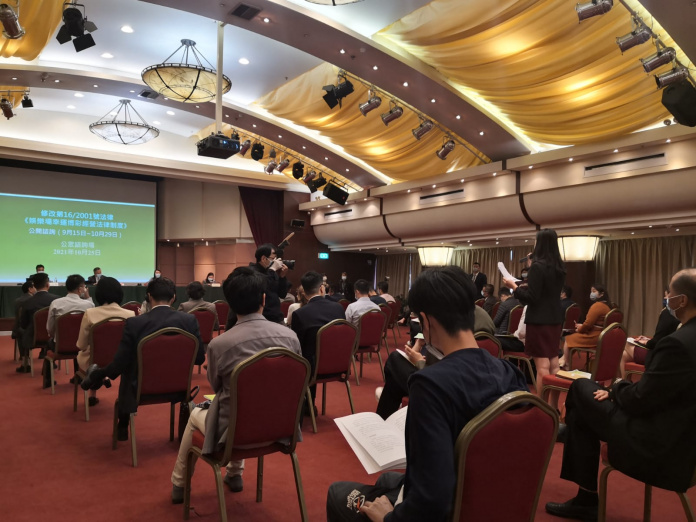 Provisions included in the future gaming law revision draft proposal concerning profit distribution and capital held by resident shareholders intends to assure gaming operators focus their activities in Macau and contribute to the local economic diversification, a Gaming Inspection and Co-ordination Bureau (DICJ) representative said in one of the last sessions of the public consultation for the new gaming law.

The Macau SAR government is currently running a 45-day public consultation exercise about the proposed amendments to the gaming law until October 29.

The face-to-face consultation session, exclusively reserved for the representatives of the gaming industry, was held on September 20, but the subsequent sessions for the general public have been delayed and separated into several sessions held in four consecutive days between October 22 and 25.

During the one hour long session DICJ representatives mainly listened to the opinions and questions made while taking notes on the inquiries, with few clarifications made or answers provided to the questions made.

In the proposed gaming law revision it is suggested that the distribution of profits to shareholders carried out by the concessionaires – regardless of being in cash or in shares – cannot be done without fulfilling the specific requirements defined for this purpose and obtaining prior authorization from the Macau SAR Government.

In a question raised to the officials, lawyer Andre Raquel inquired if the distribution of dividends would be limited by certain requirements defined by the law and if dividends distributions would be allowed more than one time a year according to defined requirements.

In a reply afterwards, Head of the DICJ Legal Division, Hoi Song U, only indicated that these requirements imposed on the distribution of dividends were intended “to make sure operators can use their profits to promote the economic diversification of Macau”.

The intention for this control is explained in the document to assure that profits resulting from gaming activities obtained by the concessionaires be applied ‘more appropriately in promoting the sustainable and diversified development of the Macau SAR’.

Lawyers previously noted that the current Macau legal framework does not include provisions that would allow government control of how concessionaires issue dividends as it is proposed in the gaming law revision, lawyers indicated.

“We need to elevate the MOP200 million registered capital requirement as gaming revenue has already reached values 21 times higher than in 2000 and in order to turn Macau into a world travel and leisure centre investment will be required,” Hoi noted.

“As for capital held by resident shareholders, this is to incentivise operators to focus their activities in Macau and assure the suitability of their management”

The new gaming law document only proposes that given the current dimension the Macau SAR government will proceed with the study and revision of the number of gaming concessions to be attributed, with the current status of a sub-concessionaire to be prohibited.

Secretary for Economy and Finance Lei Wai Nong previously indicated that authorities wanted to maintain the current sector scale but with likely impose a limit on the number of concessions.

An attendee surnamed Lei questioned representatives “how the current construction workforce could be maintained” if the current number of concessions was maintained, while another surnamed Leong inquired “if there would be a margin for more concessionaires to join the current system”

“Could the number of concessionaires be more ambitious? Maybe we could increase the allowed limit of operators to 10 but in a regulated system where maybe we could provide concessions to six but allow the possibility of adding others in the future,” another attendee added.

Former legislator and current director of the Institute for the Study of Commercial Gaming and professor in the Faculty of Business Administration at the University of Macau (UM), Davis Fong, also attended the session and issued remarks on several topics included in the document.

Concerning the number of concessions to be allowed, Professor Fong considered that to assure the good and stability of the sector we need to maintain the current sector size.

The researcher also addressed the future concession term extension, asking officials to consider the proposed goals set for the SAR diversification and the role it would play in the national development in the upcoming years.

Under the master plan for the policies that will support the construction of the Hengqin-Macau deep cooperation zone, the SAR is set to have ‘basically realized’ economic diversification by 2035.

The draft document proposes that the current concession duration of 20 years and possible extra 5-year concession should be revised, but again with no proposed duration.

“We have a current 20 years concession term. If we consider the timeline when the public tender is carried out in 20 years time we will already have surpassed 2035. When we arrive this year maybe Macau will have a different positioning? Could the concession term be reduced to 10 years plus five of extension so as to better align Macau with national development? The government would have to be more flexible,” Fong said.

“Maybe by that time Macau will have already completed its diversification. Maybe by 2035, we will already be travelling in space. Who knows?”

The former legislator also supported intentions to appoint special government delegates to oversee gaming concessionaire operations, noting that such officials are already present in concessionaires such as the Macau Jockey Club or CEM.

“When it comes to public interest the govt has the right to oversee. The impact of having this authority has not been negative for concessionaires,” he noted.

Many attendees also chose to question representatives on what demands will be imposed on gaming concessionaires for the development of non-gaming elements or support towards local SMEs.

“Operators should assume some responsibility in developing local SMEs. Operators carried out procurement seminars and initiate to assist them but during the pandemic, many SMEs faced difficulties with the drop in tourist numbers after supply orders from operators were cancelled,” a small business owner surnamed Lei stated.

Another attendee surnamed Leong asked if the new law could mandate that a certain percentage of the operators’ should be assigned for them fulfil its social responsibilities, while another attendee went as far as to propose that the government itself should become a shareholder in gaming concessionaires to assure profits are diverted to economic diversification and other social projects.

A new crime covering illegal money deposits is also proposed, incurring a possible 5-year prison sentence or fine penalty to concessionaires who, on their behalf or through their shareholders or employees, accept the deposit of cash or other amounts provided by others and, because of this, pay or undertake to pay remuneration or any other form of remuneration.

The last public consultation session on the gaming law revision is set to take place from 3:00pm to 5:30pm.

Under the local law after the public consultation is completed a final report should be published within 180 days.