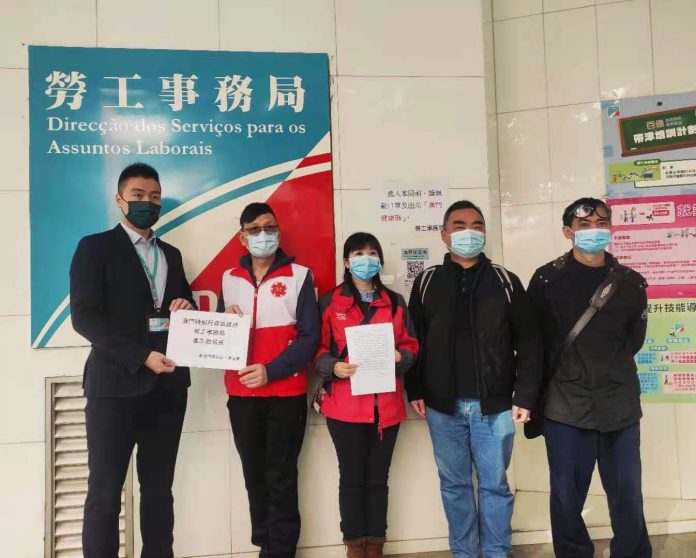 The New Macau Gaming Staff Rights Association has forwarded to the Labour Affairs Bureau (DSAL) several assistance requests it received from more than a dozen dealers working in the same local satellite casino denouncing that their employers were forcing them to resign.

Satellite casinos rely on the gaming permit of one of Macau’s six licensed casino operators, but they are under the management of a third party.

‘According to reports, the company frequently-issued warning letters based on some minor and common mistakes made by employees in daily work on-site, and some even more absurdly received notifications from the company’s human resources department that employees had asked for personal leave and sick leave for more than 45 days last year,’ the association indicated.

The company then informed them that they would have to file for automatic resignation, otherwise, they receive a letter of dismissal from the company in one week.

According to the association, it was then the casino employees turned to the group so they could refer their complaints to DSAL.

‘In fact, everyone knows that during the Covid-19 pandemic, although casinos were relatively well-staffed, they all introduced different forms of leave measures such as half-paid or unpaid leave to encourage employees to apply, and at the same time, they received their cooperation,’ the group noted.

‘However, the absurd and weird practice of requiring employees to voluntarily resign or even threaten to dismiss them just because they ask for a lot of leave is simply incredible!’

Remembering the beginning of the pandemic, the association referred to the period when the SAR government closed casinos for 15 days and then restricted the number of gaming tables and restricted access to customers as part of health prevention measures

The group noted that although Macau’s gaming industry has been affected to a considerable extent by the pandemic, casino employees during this period also faced their first employment crisis, and the issue of securing employment under this situation was a ‘major test’ for DSAL.

The association then noted that although in the second half of 2020, the income of the six major gaming concessionaires was not as good as beforehand despite a relatively numerous amount of employees, there were no layoffs and salary reductions, and the “one plus one” voluntary vacation program was generally introduced to allow voluntary applications for vacation.

Most of the currently unemployed population searching for a new job was previously employed in gaming & junket activities and the construction sector.

‘Employees can still get a certain income, reducing the impact of employees on their livelihoods. In particular, the recent announcements by gambling companies that they will issue bonuses, living bonuses or assistance to employees before the Lunar New Year is even more gratifying’

So far Wynn, Melco, SJM and MGM Macau have announced some kind of early year staff bonus despite the current Covid-19 pandemic in the local economy.

April 14, 2021
President Joe Biden sent an unofficial delegation of former US officials to Taiwan on Wednesday...

April 14, 2021
Eight months after a massive blast ripped through Beirut port and nearby districts of the...
Load more