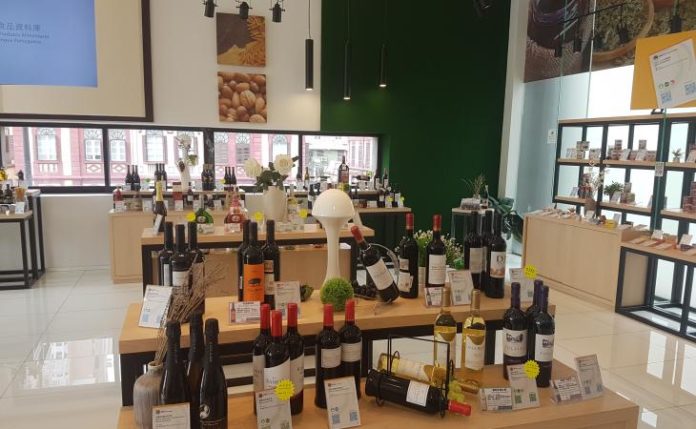 Local food and beverage suppliers tell Business Daily that so far the Portuguese-speaking countries Food Products Exhibition Centre has had a good effect in the promoted products but still want to see more food tasting initiatives. The exhibition centre in the Tap Seac Square Glass House – open since March 31 as an initiative by the Macau Trade and Investment Promotion Institute (IPIM) to promote food and beverage products – displays natural foods, snack foods, canned foods, coffee and alcoholic beverages from various Portuguese-speaking countries. IPIM representatives say that during the four months the Centre has been open, some 1,000 products from seven Portuguese-speaking countries have been exposed there, with Portugal and Brazil being the most represented. A total of 84 suppliers – with 20 from the territory – have been invited to showcase their products by IPIM, following registration on the online Economic and Trade Co-operation and Human Resources Portal between China and Portuguese-speaking Countries. According to IPIM Executive Director Gloria Ung although the official date for the Centre closure is August 27, a possible extension of the exhibition could be on the cards after evaluation of the initiative’s results. “We will talk to associations and suppliers, try to get more products and people involved, and then discuss if there might be another phase of the initiative, and maybe prolong the Centre exhibition,” Ms. Ung told Business Daily No try, no buy Although suppliers applaud the initiative, some critics complained to Business Daily that tastings were not allowed of the products in the location, limiting the willingness of buyers to purchase the products. Currently, from Thursdays to Saturdays the Centre allows a supplier to present tastings of its products but Carlos Rodrigues, General Manager of F. Rodrigues (Suc.Res) Lda., Limitada, a supplier of Portuguese food products, believes tastings should be allowed for visitors every day. “It’s a good initiative but I think they should provide not just product exposition but also tasting. Just seeing is not enough; if you’re interested in a food product you’ll want to taste it and see if you like it,” said Rodrigues. Most of the displayed products are intended for business-to-business sale, with a QR code system – a machine-readable optical label that contains information about the item to which it is attached – created by IPIM for visitors to gather more information on a specific product. After a WeChat QR Code scan the visitor is directed to the supplier’s website, where data on the product characteristics and price is provided and in some cases the visitor can purchase the item online. However, Rodrigues thinks there is “no point” in having a scanning system if the visitor can’t try the product itself, since “no-one will buy the product without trying it.” Another point the veteran food and beverage supplier mentioned was the location of the Centre itself, which he considers too far from the more tourist areas of Macau. “Tourists don’t really know the area [Tap Seac Square], so I think they could promote the location and how to get there,” he suggested. Using the square Fernando Marques has conducted business in Macau for almost twenty years as Executive Director of CME, a distributor of products from Portuguese-speaking countries, and has been involved in many IPIM initiatives in the MSAR and Mainland China. Among other products he has displayed in the Centre are frozen meat, fish, butter, coffee, and Portuguese wines. He is currently presenting Portuguese gin in the Centre until Saturday. Marques told Business Daily that he believes the Centre has had a positive effect upon the sales of the products he promotes and that it has even helped him make contact with e-commerce companies from Mainland China who visited the exhibition. “I think the marketing and promotion involved has been good for business, although sometimes it’s hard to see if the success of a product exposed was because of the advertising or the quality or novelty of the product itself,” Marques told Business Daily. As a suggestion, Marques thinks IPIM could use the space in front of the Centre to create a tasting fair or a festival where all the involved suppliers’ products could give residents a taste. Not a tasting centre Gloria Ung has responded by saying that the Centre was designed as “an exhibition place, not a tasting area” and that allowing the daily tasting of 1,000 products would be impractical and create an unnecessary waste of the food products. “If an exhibitor product is crabs or meat, something that needs to be cooked, it would be complicated, and what if people wanted to try a wine. Should we specially open the bottle?” she asked. In terms of the Centre’s location, the IPIM Executive Director says exhibitors’ products get a lot of exposure – not just in the Centre but also at local fairs such as the Macao Franchising Expo, and in local hotels like the Ritz, Emperor and Beverly. “We’ll always listen to suppliers’ opinions and think of ways to improve product promotion and how to collaborate,” the IPIM Executive Director told Business Daily.