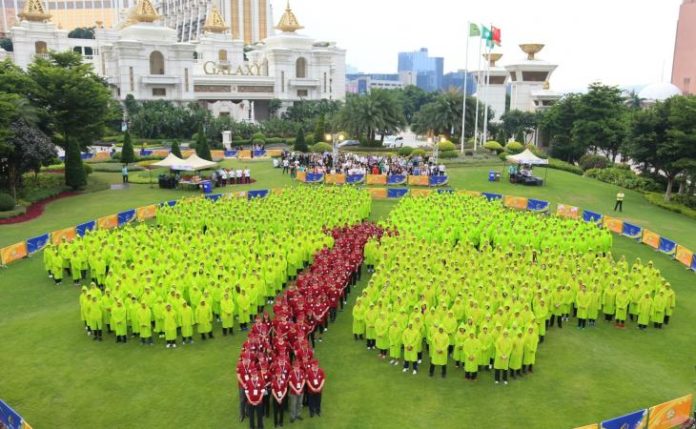 Staff members of the Galaxy Entertainment Group have set a Guinness World Record by having around 1,068 staff members from different departments form a four-leaf clover yesterday on the lawn in front of Galaxy Macau. The clover itself represents good fortune in Western culture and bliss in Asian culture, and serves as the emblem of the company’s service philosophy – ‘World Class, Asian Heart’. The Guinness World Record was achieved by having the staff form the clover and remain intact for ten minutes. Singing and dancing performances also took place during the event. Francis Lui Yiu Tung, the Vice President of Galaxy Entertainment Group, also took part in forming the clover with the rest of the staff. ‘Since the establishment of the “World Class, Asian Heart”, many customers are pleased and satisfied because of our excellent service from our staff,’ Francis Lui commented during the event. This is the first time the gaming company has held such an event. The event yesterday was aimed at strengthening the unity and morale of it staff members, in preparation for the opening of future phases.