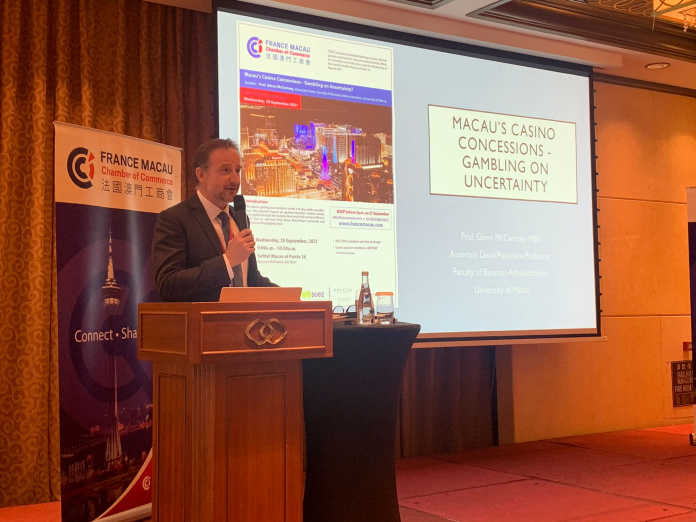 Tourism and hospitality scholar Glenn McCartney proposes that a long-term approach to the duration of the future gaming concessions is the option that best serves the interests of the region and the industry.

In a Breakfast Meeting held by the France Macau Chamber of Commerce (FMCC) on Wednesday, McCartney, an associate professor at the University of Macau’s Faculty of Business Administration, suggested a scheme where during the concession period regular reviews could take place.

“I’m going for the long game”, he stated during his presentation “ Macau’s casino concessions – Gambling on uncertainty?”, while noting that risks and uncertainties alongside operational costs should be considered when analysing the duration of the future gaming concessions.

The scholar also suggested that it would make sense to encompass the concession term in the wider picture of the regional master plans which have a longer-term approach – around 15 years – such as the one for the Greater Bay Area and the Guangdong-Macao In-depth Cooperation Zone in Hengqin.

Glenn McCartney emphasised that there is a need to consider the “bigger picture of how to make Macau more outstanding in the Greater Bay Area as a city”. Against this backdrop, “Is this a time to incentivise or disincentivise gaming operators?”

“I understand that people don’t want to put the longer one because they want to make sure that operators are delivering, through a regular review”, McCartney told Macau News Agency on the sidelines of the FMCC event.

The current law sets 20 years as the maximum period for gaming concessions, considering that the Government can extend the concessions for up to five years.

The consultation paper on the gaming law, which is going through a public consultation until October 29, mentions that the “imposition of an excessively long or inflexible concession period may cause a certain level of an obstacle, probably leading concessionaires to be less proactive in improving their services to attract new customers”, before proposing that “the concession period for the exploitation of games of chance in casino be revised”.