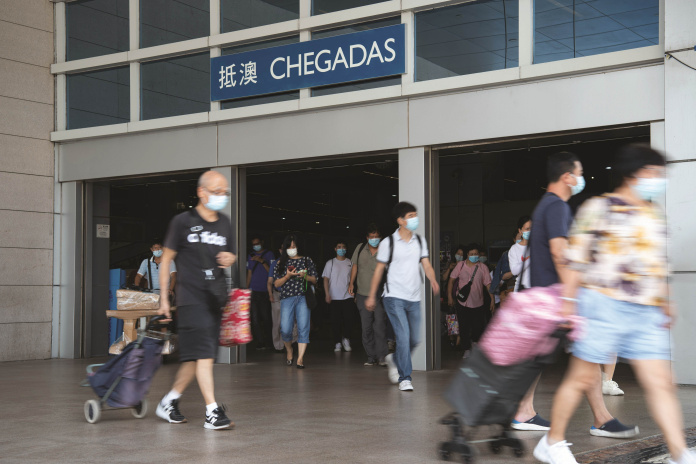 A Gongbei Border Gate private security guard is suspected of having assisted nine people without valid personal health codes to cross the border to Zhuhai in exchange for money, the Judiciary Police (PJ) has announced.

According to local police authorities, this private security guard was entrusted by the Health Bureau with the health codes of those passing through the border at the departure hall of the customs gate.

The guard is suspected of selling fake green health codes to people who didn’t have taken any nucleic acid test results, helping nine people cross the border this way within one month, receiving RMB400 (MOP484/US$60)) per person.

The man was charged with document forgery and bribery perpetrated by civil servants.

The Judiciary Police revealed that a mainland resident complained to the Macau Health Bureau in the middle of last year about the situation and disclosed the case.

Border rules for nucleic acid tests prior to crossing to Zhuhai from Macau during that period last year ranged between 48 hours, 24 hours or even 12 hours at one time due to confirmed Covid cases either in the SAR or the neighbouring Chinese city.

The 31-year-old Mainland male security guard that was arrested in this case admitted his crime, confessing that after finding the customers when he was on duty, he would send his own Macau health code and Guangdong health code to the customers through his mobile phone, then checked the codes himself and let them pass through the border.

PJ also intercepted a Mainland woman for inspection, who confessed she had bought the Health Code for the purpose of passing through the border.

She was accused of a crime of bribery and forgery of documents, with police authorities still investigating the whereabouts of the other eight people.