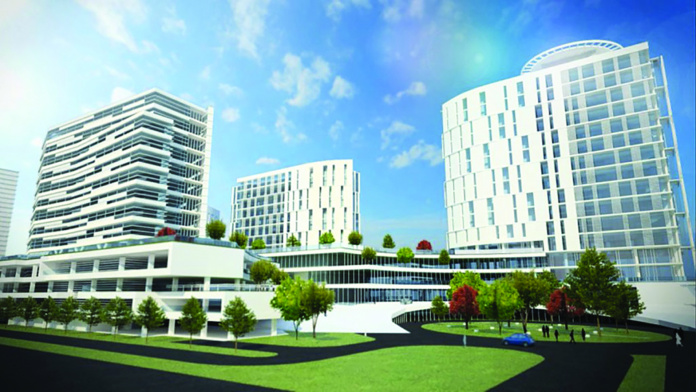 Macau authorities have created a strategic development committee and a preparatory cabinet for the new hospital in Cotai to be managed in a public-private partnership with the Peking Union Medical College Hospital.

The commission will work directly under and under the guidance of the Secretary for Social Affairs and Culture and will be in charge of supporting the Macau government in the preparatory works to develop the city’s second public hospital in the Islands Healthcare Complex.

The 420,000-square-metre complex in Cotai is expected to be completed by the end of this year, with a gradual operation start in 2023.

The new hospital will be run in a public-private partnership and a non-profit model — with all the facilities of the complex owned by the government, while the Peking Union Medical College Hospital from Beijing will take charge of its day-to-day operation and management.

The commission will also include a Liaison Unit, intended to support external communication, cooperation and exchange, namely contact and technical articulation with public entities or institutions in Mainland China, with its members appointed by the Secretary for Social Affairs and Culture, on a proposal from the President of the Commission.

Meanwhile, the new hospital Medical Center Preparatory Office will also start operating on August 11 and be under the purview of the Secretary for Social Affairs and Culture.

The new office will be responsible for coordinating the preparatory work to establish the new hospital, including establishing its management and operation mechanism; supporting human resources planning and training program for its staff; establishing its gradual opening phase; follow-up the construction work; and purchasing of equipment, services and medicine.

It will also be responsible for developing the specific legislative work necessary for the operation of the new hospital, including laws, administrative regulations and other statutes and regulations.

With an investment of at least MOP9.86 billion (US$1.23 billion) for the first phase — including the General Hospital Building, Auxiliary Facilities Building, Integrated Services Administration Building, Nursing College, Staff Hostel Building, Central Laboratory Building, while a Rehabilitation Hospital is left for construction in the second phase — the Cotai hospital will boast about 1,100 beds, boosting the number of beds in all public and private hospitals in the city by 50 per cent from about 2,150 existing beds now.

The Peking Union Medical College Hospital was founded by the American Rockefeller Foundation in 1921 and came under the control of the Chinese central government in 1951.

Affiliated with the Peking Union Medical College, also known as the Chinese Academy of Medical Sciences, the Beijing hospital has been crowned in first place for 12 consecutive years in the annual ranking list of hospitals in Mainland China compiled by the Hospital Management Institute of Fudan University.