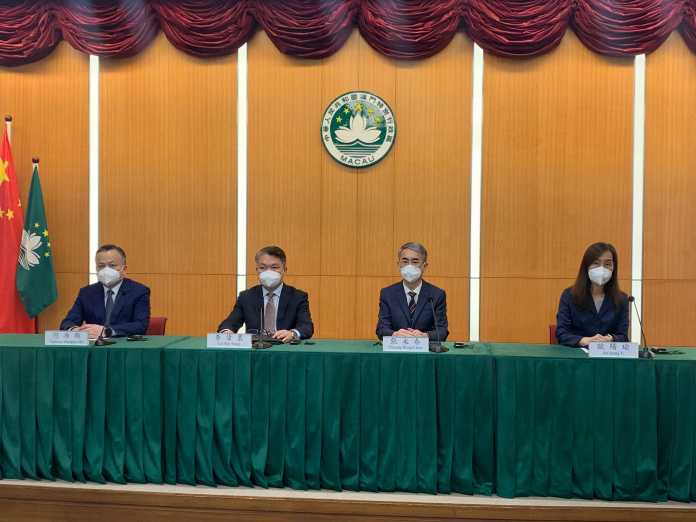 The Macau government guarantees that there will be an “equal” playing field for the city’s existing gaming operators and newcomers, which are interested in bidding a gaming concession in the public tender process to be launched on Friday (July 29).

Speaking in a press conference today (Thursday) about the public tender process, Secretary for Administration and Justice André Cheong Weng Chon also emphasised the government might not grant all six gaming concessions should there be less than six bidders meeting the government requirements.

In an executive order of the Chief Executive (CE) published in the Official Gazette today, the administration announced the bidding period will last from July 29 to September 14. The order also noted a total of six gaming concessions will be issued with the concession period capped at 10 years.

The city’s current six gaming concessions and sub-concessions will expire by the end of this year, following a six-month extension in June for the government to have more time to prepare this new tender.

This tender is launched as the city is suffering its worst community Covid-19 outbreak since the pandemic started more than two years ago, with travel restrictions like mandatory quarantine in place for visitors coming to Macau from regions beyond Mainland China and a 12-day closure of casinos this month.

“This public tender of gaming concessions is open to all investors that are capable and interested in Macau, and we believe overseas parties that are capable and interested [in Macau] will take part in this tender,” said Mr Cheong, who is also the head of the commission in charge of the gaming tender process that was established yesterday (Wednesday). Adriano Marques Ho, director of the Gaming Inspection and Coordination Bureau, is the secretary of the eight-strong commission.

While a total of 21 companies and conglomerates submitted bids for the last public tender of casino concessions two decades ago, Mr. Cheong didn’t not provide any estimate today on how many bids the authorities expect to receive.

He only pinpointed the on-going fluctuations of the pandemic development “will not significantly impact” the interest level of would-be bidders, stressing: “Local and overseas investors that are interested in bidding a [Macau] gaming licence have probably started their preparation before this pandemic, and will not be affected by this new wave [of community outbreak in Macau].”

He added the new round of bidding will last for 48 days compared with 33 days two decades ago, providing “enough time” for the preparation of would-be bidders.

Though the CE executive order today said a total of six concessions will be granted in this new tender, Mr Cheong remarked in the press conference: “The SAR Government will evaluate whether the bidders match the requirements of qualification, financial capabilities, non-gaming pledges, expanding overseas markets and others, and may not award all six concessions.”

He also reiterated several times today that the authorities would treat the existing gaming operators and other would-be bidders “equally” during this new tender, with no preferences given to the existing operators.

The government has signed contracts with the six existing operators last month during the six-month extension that 19 casinos directly owned by the six concessionaires and sub-concessionaires would revert back to the government “without any cost” by year-end at the conclusion of their current concession period, he revealed.

“Whether [the winning parties in the new tender] are the current gaming operators or newcomers, the SAR Government will lease these gaming facilities, which are assets of the SAR Government, to the winning bidders for operation [in the beginning of next year],” Mr. Cheong continued.

The official  emphasised that there is “seamless connection” in terms of gaming facilities and staff between incumbent and new concessionaires. Any newcomer “has no excuse to say it is not ready to operate” on January 1, 2023, if it wins the concession, the official said.

According to the CE order published today, the bids in the new tender will be evaluated in tandem with seven criteria: the amount of the premiums the bidders propose; their plan in exploring non-Chinese markets; their experiences in casino gaming and related fields; the benefits of their gaming and non-gaming investments; their casino management plan; their proposal of overseeing and preventing illicit activities in casinos; and social responsibilities.

Mr Cheong particularly highlighted today this new tender focuses on non-gaming investment, expansion of non-Chinese markets, development of local small-and-medium-sized enterprises, and others, compared with the focus of the development of gaming facilities and resorts 20 years ago. He stressed the current Covid-19 travel restrictions of the city were only temporary and would not impact the drives of the new concessionaires to entice overseas gamblers.

In regards to “satellite casinos”—gaming venues that are run and owned by third parties under the concessions of the existing operators—the official said in the press conference these gaming facilities do not have to be reverted back to the government by the end of this year as they are not owned by the existing gaming operators.

These “satellite casinos” can continue to operate next year if they have matched all the government requirements and reached deals with the new concessionaires, Mr Cheong added. “The government stance is clear that the tally [of these facilities] will not increase but only decrease in the future,” he added.