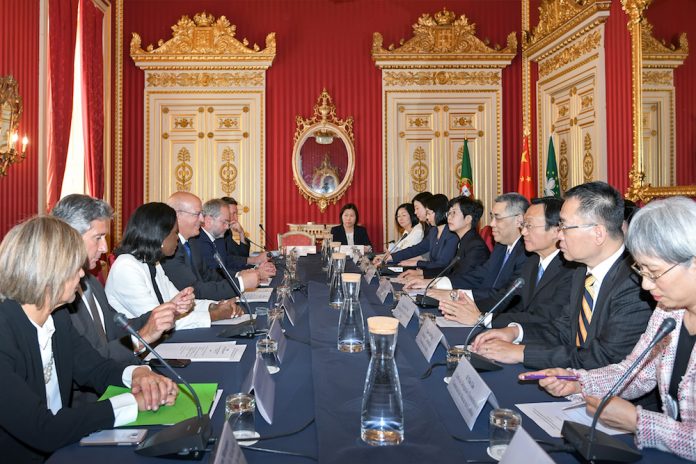 The Macau Chief Executive said on Wednesday that the region will continue to boost cooperation between Chinese and Portuguese-speaking companies and support “startups” who want to go to Macau or the Greater Bay Area.

Chui Sai On made the comments at a press conference in Lisbon, alongside the Portuguese Foreign Minister, Augusto Santos Silva, which took place after the sixth meeting of the Portugal-Macau Joint Committee, a mechanism created under a framework cooperation agreement between Macau and Portugal.

The president of the Macau SAR spoke also mentioned the recent visits by Chinese President Xi Jinping to Portugal and Marcelo Rebelo de Sousa to China.

According to the head of the executive, these visits are a demonstration of the “constant deepening of the global strategic partnership between China and Portugal, of the historical ties between Macau and Portugal and also Macau’s role as a platform for relations between China, Portugal and Lusophone countries”.

Chui Sai On also stressed the “excellence and growing influence” of the Forum for Economic and Trade Co-operation between China and Portuguese-speaking Countries.

As an example he indicated that “last year trade between China and Portuguese-speaking countries reached US$147.3 billion , which is about 13 times more than in 2003.”

The Macau CE began an official visit to Portugal on Saturday, which will run until next Saturday and will pass through Lisbon and Porto.

Prior to the joint committee meeting, the President of the Macau SAR had already met with the Prime Minister, António Costa, and the Portuguese President, Marcelo Rebelo de Sousa, among other entities.

The Portuguese Prime Minister announced that Portugal’s support will enable Macau to “better play the role” in creating a base for Portuguese language training and tourism.

Fernando Chui Sai On acknowledged that “Portugal’s support will be positive for Macau, because it will better play its role in creating the Portuguese language and tourism base”, under the Chinese initiative “One Belt, One Road” and better integration into the Guangdong-Hong Kong-Macau Greater Bay Area project.