The Macau SAR government has today (Monday) published the administrative regulations for the public disclosure of information by public companies in which authorities hold a majority share.

The instructions were devised by the new Macau SAR Public Assets Supervision Planning Office, headed by former Secretary for Administration and Justice Sonia Chan Hoi Fan, and created by the current administration.

The Secretary previously stated that these instructions – effective June 23 – intend to increase the transparency of the operational data and the financial situation of publicly-held companies.

The instructions apply to publicly traded companies in which the Macau SAR or other public legal entities hold, directly or indirectly, and cumulatively, financial interests of more than 50 per cent, regardless of whether it is a parent company or a subsidiary.

These public-owned companies will have to disclose information on shareholders and their shareholding, including the list of shareholders, the value of their financial participation, and the percentage of the shares they hold.

Other obligations include financial statements and annual activity reports for the year 2019 and each following economic year, as well as professional audit reports, if any, and purchases made after the instructions come into force.

For goods and services purchases greater than MOP4.5 million (US$563,701) or works exceeding MOP 15 million, the summary description of the acquisition is to be disclosed, as well as the results of the opening of tenders and contracts awarded.

Public companies will also have to disclose information from general meetings, the board of directors or other management bodies, as well as from the supervisory board or the single auditor, such as the names of the holders of the bodies, the positions they assume, and the respective mandates.

The new directives also imply that information on the incidents that the board of directors and other management bodies consider may have significant impacts on the exercise of the company, such as relevant investments or disposals of assets by the company, material losses, breaches of contract due to a failure to repay debts, relevant lawsuits related to the company, or any decision to break up the company.

Companies will have to publish this information in the Public Assets Supervision Planning Office website, delivering their respective information since the enforcement of the new instructions before their deadlines, ranging from 30 to 90 days.

Financial statements and annual activity reports for 2019 must be submitted within 30 days after the entry into force of the instructions, for example, and within 6 months after the end of the respective economic year.

However, all the previous instructions are not applicable in case their disclosure is prohibited under the law, the information falls within the scope of trade secrets, or is subject to a confidentiality agreement.

US merger helps Deutsche Telekom to record revenues in 2020

As Trump returns to political stage, nagging questions about 2024

Half of Israelis have had at least one Covid jab: ministry 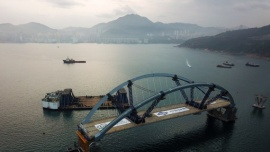