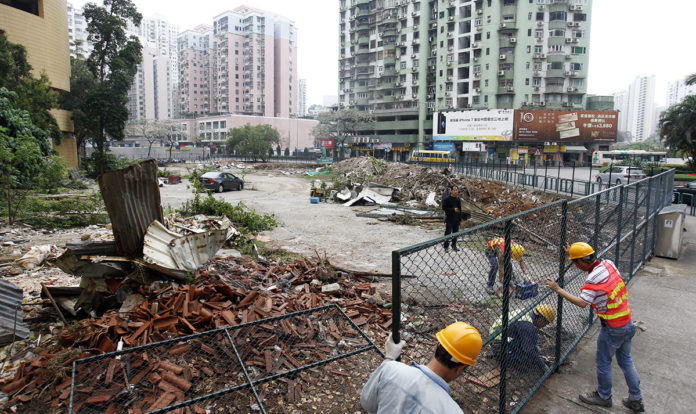 The Macau SAR Government has reclaimed a 2,900-square-metre plot of land in Taipa that was illegally occupied. The parcel will now be developed into a police department building for the Islands, according to a press release from the Land, Public Works, and Transport Bureau (DSSOPT) yesterday.
Located between the Avenida de Guimarães, Avenida Dr. Sun Yat Sen and Rua Siu Kuan, the plot had been fenced off and was being used as a storage area for containers, construction material and machinery when the Bureau initiated the case.
Despite not being able to identify the occupants of the land, DSSOPT reached a final decision in December 2016, ordering the land to be returned to the government and requesting that the property be evacuated.
The Bureau noted that no entity or individual had claimed right of ownership over the plot during the period it had allocated for the occupants to vacate the plot. But it added that the majority of the objects in the plot had been cleared away when it visited the site following the deadline for the clearance.
DSSOPT added in the announcement that it has recovered a total of 63 illegally occupied plots so far, occupying a total of 336,000 square metres.
It claimed that it will carry out further studies to determine the purpose of the latest reclaimed plot in accordance with the city’s social and economic development.