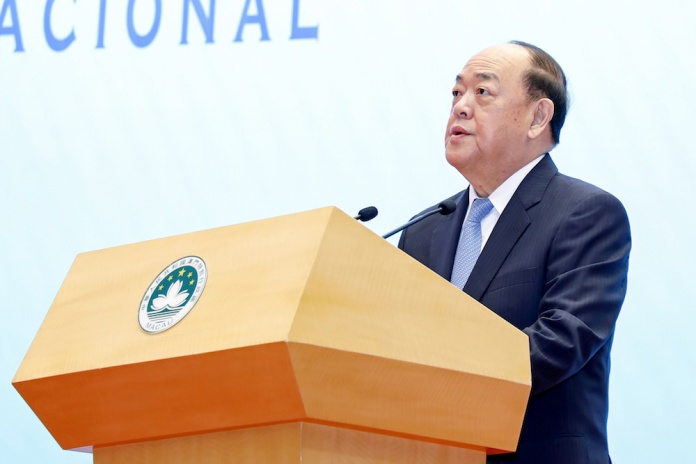 The head of the Macau government reiterated the importance of national security and the need to continue to improve the legal regime and enforcement mechanism to strengthen China’s defence system.

Ho Iat Seng was speaking at the inauguration of the “national security education exhibition” yesterday (Thursday) and the first composition contest “Me and National Security” for high school students, on the occasion of the celebrations of the sixth day of Chinese national security.

“We must continue to improve the legal regime for the defense of national security and its enforcement mechanism, to strengthen the national security defense system” so that the “fundamental principle ‘Macao governed by patriots” is “fully implemented, in favor of the sovereignty, security and development interests “of China, he stressed.

The CE stressed that the Government will continue to oppose “intransigently the interference of external forces in the affairs of Macau”, to “reinforce education about the Constitution and Basic Law” [which functions as a mini Constitution of the territory] and also to “promote the successful, stable and lasting implementation of the ‘one country, two systems’ principle with Macao characteristics”.

“It is an unavoidable duty of the Government of the Macao SAR to properly guide young people in Macao to gain an in-depth knowledge of the motherland and Macao, awakening their national identity and civic responsibility,” he said.

Also the director of the Liaison Office of the Central People’s Government in the MSAR, Fu Ziying, said that the Macau Government should reinforce national awareness and consider the situation more fully, fully implement the general concept of national security and proceed with the joint defense of security. national.

On the same occasion, Secretary for Security, Wong Sio Chak, stressed that the law on defense of state security, enacted in 2009 by the Government of the territory, “is not a complete law and requires other supporting legislation to complement it. “.

Approximately 350 government officials and other individuals were present at the opening of the “National Security Education Exhibition”, jointly organized by the Government of Macau and the Central People’s Government Liaison Office in Macao SAR, at the Service Platform for Cooperation Complex Trade between China and Portuguese-speaking countries.

The exhibition, which has been held for three years, opened on the occasion of National Security Education Day and features texts and images on four themes: “national security in the face of major, unprecedented changes in the last hundred years”, “persist in the general concept of national security, creating a great structure of security “,” the defense of national security guarantees the stable and lasting implementation of the principle ‘one country, two systems’ “and” national security, a responsibility of the entire population “.

May 13, 2021
Two climbers from the United States and Switzerland have died on Mount Everest, becoming the...

May 13, 2021
Covid cases are declining quickly while vaccinations continue to rise slowly but surely in the...

May 13, 2021
Myanmar's Buddhist monkhood led an earlier struggle against military rule but is split on the...
Load more