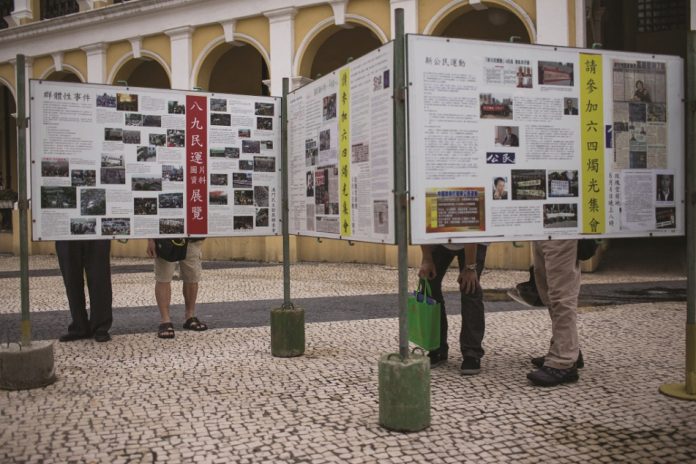 The Municipal Affairs Bureau (IAM) has withdrawn authorisation for an open-air photo exhibition about the June 4 Tiananmen crackdown requested by the Democratic Development Union in different areas of the city, TDM radio reported.

The association usually organises vigils and exhibitions about the 1989 Chinese government crackdown on student-led demonstrations.

IAM President Jose Tavares told TDM radio that the reason for the authorisation removal administrative council to “standardise” all requests by non-governmental organisations (NGOs) to use public spaces.

“Our administrative council has decided to standardize orders. That is, requests for the use of our spaces must match our attributions and competencies. It was a decision that we made on the council,’ Tavares added.

However, legislator Ng Kuok Cheong claimed in statements to the broadcaster that the reason for ‘de-authorisation’ was political and an “attack on freedom of expression”.

“We already had authorization to use various spaces in Macau from 7 May to June 8, but suddenly, yesterday, the Government withdrew this authorization. Clearly, it is a sudden decision so that we cannot use the spaces and try to impede our freedom of expression due to political reasons,” he told the radio.

The legislator believes that IAM only “discovered” later that it should not have given permission to the exhibition and had to come up with an excuse for removing the authorisation.