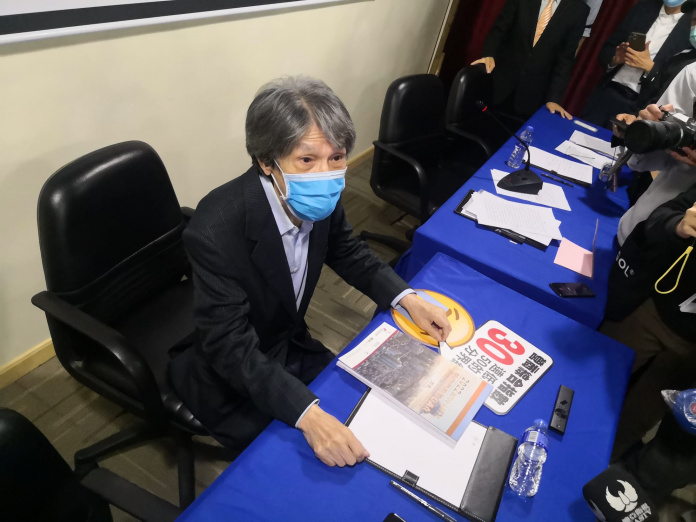 In a fiery showing today (Tuesday), gaming businessman and former legislator David Chow Kam Fai urged local authorities to listen to the opinions of society and focus on the local core industries as the only way to recover an economy badly hit by the Covid-19 pandemic, even underlining that the future of the One Country, Two Systems principle itself was in question.

“I don’t know what the government is doing. Do they even know themselves? The gaming industry is very important for Macau, it has continued for 20 years but now they have cut a lot of things,” the businessman said today (Tuesday) after taking part in an event to reveal the results of a survey organised by the Federal General Commercial Association of Macau Small and Medium Enterprises.

The survey inquired about 500 local SMEs, with most respondents stating they have a very negative outlook on the business environment due to high rent costs and the drop in tourist numbers due to the pandemic.

“It is the government’s responsibility, we tried to tell them. They have to listen and try to solve it reasonably. Talk to the Chinese government. The gaming industry in Macau is important. Don’t worry about going on a new programme, concentrate on the old industries and make them grow. It is the only way to survive in the next five years,” Chow noted.

“The figures, the timing, and the marketing cause a lot of problems they do not understand. They are not businessmen but they have to understand. Macau’s economy goes down the One Country, Two Systems also goes down”.

Chow noted that he was making the comments as a member of the National Committee of the Chinese People’s Political Consultative Conference, an advisory body to the Chinese government, and not as the founder of Macau Legend Development Ltd.

However, the businessman considered that Macau’s core business was still tourism and gaming and criticised recent calls by Chief Executive Ho Iat Seng for the sector to avoid focusing on only a single source market, mainland China, and target international visitors.

After the pandemic led to a plunge in visitation from almost 40 million in 2019 to 5.8 million in 2020, the total tally has improved to more than 7.7 million in 2021, most of them hailing from mainland China.

Meanwhile, the Macau SAR gaming sector has reported almost MOP3.6 billion (US$455.1 million) in March of this year, the lowest monthly tally since September, 2020.

Gross gaming revenue reported in the first three months of this year dropped by 7 per cent quarter-to-quarter to MOP18 billion.

The pandemic hit has led Macau’s general unemployment rate for 2021 to increase to 2.9 per cent, its highest reported since 2009.

While responding to questions from legislators at the Legislative Assembly this month, Ho stated that upon the city’s administration handover in 1999, the SAR also had only about seven million tourists, but they came from a wide array of origins including Southeast Asia, Japan and Thailand.

Most of the city’s international market has been kept at bay by pandemic entry restrictions, with non-residents not authorized to enter the city since March, 2020, with the city basically only open to the mainland market for most of two years.

“Macau is about tourism […] but when will the market come back? You talk about international, I think this is non-sense. Hong Kong has a great problem. I can’t even bring my private jet to the Macau airport. I don’t know where is the international market,” Chow noted.

The businessman also criticised the overhaul expected in the recent gaming bill proposals, one to amend the general gaming law and another regulating the operations of junkets, sub-agents and managing entities responsible for properties where ‘satellite casinos’ are located.

Under these proposals, managing entities responsible for properties where third-party run casinos are operated will also only be allowed to establish business contracts with one gaming concessionaire.

The general law bill had already revealed that junket operators will only be allowed to do business with one sole gaming operator, with the newly revealed bill showing a similar business arrangement will be set for entities responsible for satellite casinos.

The satellite casino issue has been one of the more contentious during the ongoing discussion and evaluation of the general gaming law amendment by a Legislative Assembly standing committee.

Under the draft bill after an initial three-year transition period, casino properties owned by independent investors would be either permanently closed or acquired by the six prospective concessionaires.

Macau Legend stands to be one of the most impacted by changes, with some closures in the satellite casino sector having already been announced.

Chinese language newspaper Macao Daily News reported on March 24 that seven satellite casinos are planning to stop operations by mid-year, due to the tightening of visa applications to Macau, lack of cash flow, and the negative impact of the repeated pandemic outbreaks.

Four of the casinos set to be closed were said to be linked to Chan Meng Kam’s Golden Dragon Group.

Emperor Entertainment Hotel Limited also announced that the casino located in its Grand Emperor Hotel will cease operations as they will not renew the service agreement with gaming concessionaire SJM set to expire on June 26.

Chow contested statements by local authorities have claimed the sector had been suffering a restructuring even before the gaming law changes were announced blaming it on the considerable changes proposed.

“What is the difference between 10 licenses, six licenses or even three licenses? It’s the same market, you need the market in Macau,” Chow noted

“The figures, the timing cause a lot of problems they do not understand. Government officials are not businessmen, they have to understand”.

The survey revealed today by the Macao Research Center and organised by the Federal General Commercial Association of Macau Small and Medium Enterprises claims that 44 per cent of inquired SMEs, especially from F&B are worried that the close-down of these casinos would result in the loss of important business support and the decrease in the flow of customers.

‘The SAR government should carefully observe the issues derived from the closure of satellite casinos. When the closure triggers off unfavourable chain effect, the government should strive to deduce its negative impact on the industries related to these casinos, as well as the SMEs in Macau,’ the report states.

Speaking during the survey result presentation the CEO of Macau Legend and Vice-President of the association that commissioned the study, Melinda Chan Mei Yi, stated that since casino peripheral businesses rely on satellite casino customers to survive, the decline in the number of gamblers and the decrease in orders from casinos would have a long-term impact on Macau’s economy and employment of residents.

“We wanted to show the government how critical the situation is due to casino closures, the gaming law amendment and the pandemic. We hope with the survey results and other proposals authorities can advance policies that can offer a light at the end of the tunnel,” Chan – who is also the spouse of David Chow – stated.