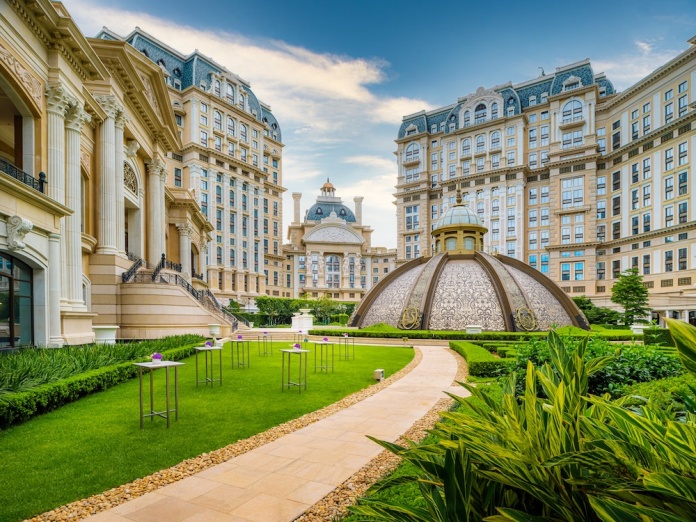 SJM’s Grand Lisboa Palace has opened its doors at noon today (Friday) with a series of amenities and facilities already available to the public, the group announced.

Describing it as a ‘much-awaited milestone’ to the group’s as its first Cotai property, chairman Daisy Ho noted in the announcement that ‘over the next few months, more facilities will continue to be added to the property’.

Just two days again Ho made the surprising announcement that the HK$39 billion (US$5 billion) property would partially open today with only 300 of the 1,350 rooms included in the Grand Lisboa Palace Macau Hotel available, plus some restaurants and event space.

‘A monumental amount of effort has gone into making this project a reality and it is our attempt to diversify Macau’s tourism landscape by bringing in never-before-seen elements,’ Ho noted.

The Gaming Inspection and Coordination Bureau of Macau (DICJ) has also approved 150 new gaming tables for the property, with the group also allowed to add additional tables from other SJM casinos and the installation of 1,200 slot machines in the resort.

Ho also revealed in a blessing ceremony held this morning that the group plans to transfer 118 gaming tables from other properties to its new Cotai integrated resort.

The SJM chairman had previously indicated that the operator was still evaluating how many will be available on the first opening day, and the VIP/mass allocation, but all available tables are currently are destined for mass.

The property also features over 3,800 square metres of indoor and outdoor events for banquets, conferences, meetings, such as the 1,400 square meters pillar-less ballroom, The Grand Pavilion, able to accommodate up to 780 guests in round-table banquets or 1,500 guests in a cocktail setting.

The group is also said to have hired a total of 3,500 people as the workforce to operate for the new property.

The Grand Lisboa Palace includes approximately 1,900 hotel rooms and suites in three hotels, with the Palazzo Versace and the Karl Lagerfeld themed hotels, which feature 270 rooms each to open in phases over the next months.

The property was initially scheduled to open by the end of 2020 but successive delays either due to the pandemic or licensing ended with the property opting for a phased opening in the second half of this year, dependent on the progress of pandemic-related travel restrictions.