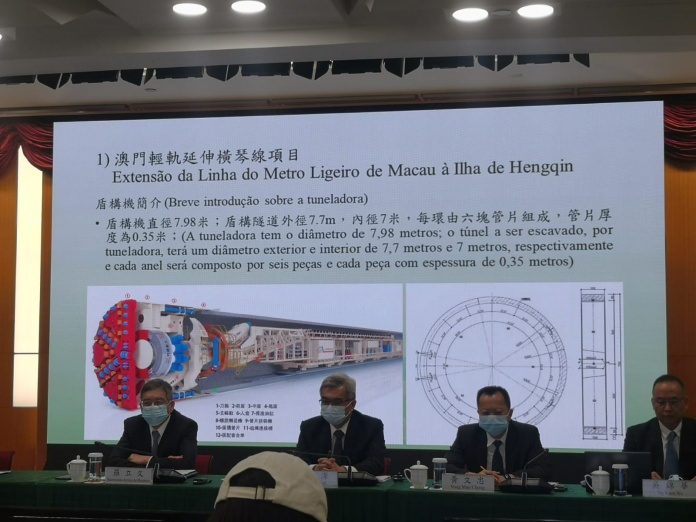 The comments were provided in a special press conference today (Wednesday) for the Security and Transport and Public Works Offices to discuss their role in the future Hengqin cooperation zone plan.

The works for the MOP3.46 billion (US$436.7 million) Hengqin Extension Line, linking the Taipa section to the Macau-Hengqin border terminal were initiated in March 2021 and are scheduled to be finished by 2024. The project has been granted to the state-backed group Nam Kwong.

The line will only have 2.2 kilometres – 900 meters of which being an underwater tunnel – and two stations, one on each side of the water channel.

According to Lam, the future line will have two lanes with a four carrier metro, able to carry 1,568 people per hour, with the trip across taking 6.5 minutes.

The works to demolish the former Lotus Bridge Checkpoint on the Macau side have already been completed since March 2021 the old border checkpoint has already been demolished, with traffic lanes adjusted, 90 per cent of electric cable works completed and with the underwater tunnel works already initiated.

The underwater tunnel will be dug by a tunnelling machine almost 8 meters in diameter.

The future LRT Henqgin connection will allow a link to the Guangzhou-Zhuhai Intercity Railway, as part of efforts to improve transport interconnectivity between Macau, Zhuhai and the rest of Guangdong.

According to Secretary for Transport and Public Works Raimundo Arrais do Rosário, after arriving at the Hengqin border station user will have to leave the line, complete border customs clearance and then be able to use any further metro line in the mainland side, with the same happening in the opposite direction.