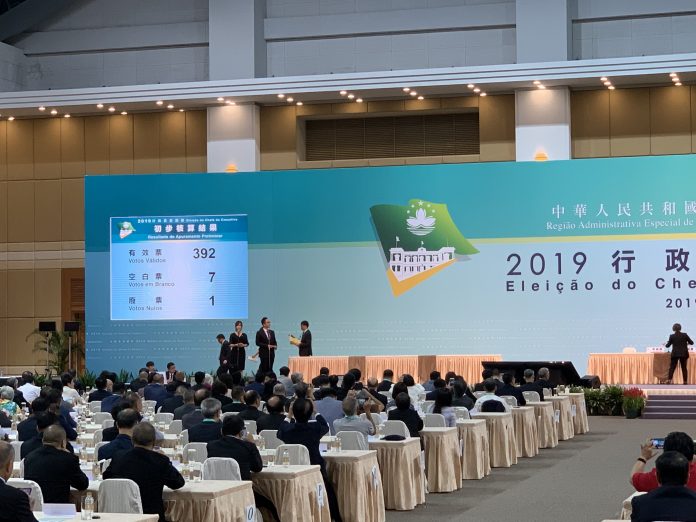 Ho Iat Seng was elected the new Macau Chief Executive (CE) today, with votes in favour from 392 members of the CE Electoral Committee, seven blank votes and one invalid vote.

The CE election was held at the East Asian Games Dome at 10:00am today, all 400 eligible CE Electoral Committee members present for the voting.

Mr. Ho obtained 98 per cent of votes in the election, which was higher than what was recorded in 2014.

In the 2009 and 2014 CE elections, Fernando Chui Sai On had gained the favour of 95.27 per cent and 95.96 per cent of the CE Electoral Committee members, respectively.

Ho Iat Seng was born in Macau in June 1957, with his ancestral homeland being in Zhejiang. His father, Ho Tin, is widely known as ‘the first Macau industrial entrepreneur’.

He was a member of the Macau SAR Executive Council between 2004 and 2009. In 2009, he was elected as one of the indirectly elected legislators representing the first sector – Industrial, Commercial and Financial sector in the Legislative Assembly, and was also elected as the AL Vice-president.

In October 2013, Ho was elected as the AL President and maintained his position in the AL election in 2017.

Ho was also a deputy of China’s National People’s Congress (NPC) and a member of the NPC Standing Committee since 2001.

In April 2019, Ho announced his resignation from the positions as AL president and at the NPC in order to run for CE position and also renounced his Portuguese nationality.

Although several residents announced their intent to run for CE, only Ho was able to cross the candidacy threshold of 66 nominations. He eventually obtained a total of 379 nominations from the CE Electoral Committee during the nominating period.

Apart from the first CE election in 1999, all CE elections had only one candidate for the top government position.

The sole CE candidate kicked off his election campaign on August 10 and announced his political platform.

Pledging to improve public governance and administrative efficiency as well as to create a new style of public housing category for ‘sandwich’ class and youth residents, were the main commitments from his campaign.

Ho also emphasized that Macau has to be an example of good implementation of the ‘One Country, Two Systems’ and was also open to further democratic electoral reforms.