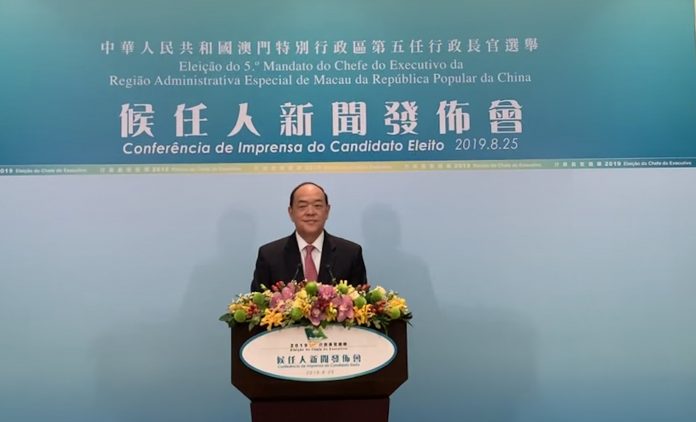 Ho Iat Seng, the Chief Executive-elected today, said that he has talked with the gaming industry in Macau in the hope of encouraging the sector to take more corporate social responsibility.

Ho remarked that he has met several gaming concessions during the campaign period, not to discuss gaming licenses, but to encourage them to support local small and medium-sized enterprises.

The CE-elected believes gaming license will not be a ‘sensitive’ politic issue if all relevant laws are amended appropriately.

Considering that Macau’s economy is expected to face a time of recession until the end of the year, Ho stated that a stable social environment is important to maintain a steady economy in the city.

“Although package tours from Hong Kong have reduced, Macau can still count on other package tours from the Mainland and our airport is operating normally. I don’t think gaming enterprises would need to place furlough on employees. But we can see that some hotels in Hong Kong have to give a no-paid leave to their staff now, so it is very important that we maintain a certain economic stability”, he said.

The CE-elected added that residents in the city have been enjoying much more freedom since the handover and he believes the Basic Law has protected residents’ freedom of protest and assembly.

“The Basic Law guarantees residents’ right and freedom of assembly, protest organizers are allowed to appeal to the Court if the police reject their request to protest. I don’t think anyone has been deprived of their right of assembly”, he stated when addressing the question of the failed protest against Hong Kong police which was intended to be held on August 19 at Senate Square but rejected by the Public Security Police Force (CPSP).