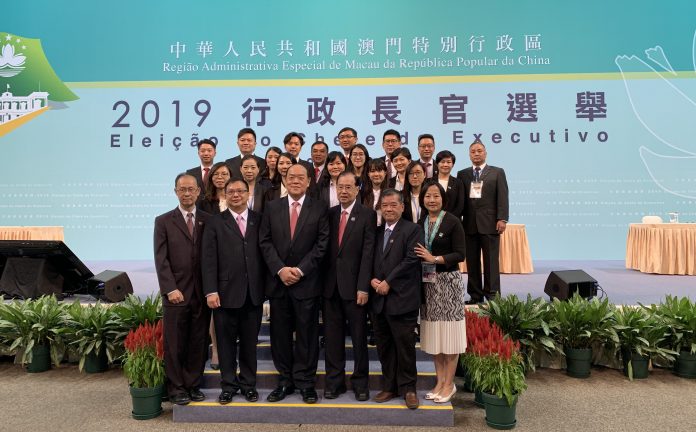 After being elected as the Fifth Chief Executive-Elected of Macau SAR today, Ho Iat Seng stated that he felt the ‘pressure’ to implement his political platform but that he was confident he had the capability to fulfill his commitments.

In his acceptance speech, he thanked Electoral Committee members and residents, alike for all the trust and support, promising he will be candid about the problems and challenges that Macau will be facing, focusing on and seizing Macau’s advantages and opportunities in the reform and with the aim to open the country to a new era.

“I am fully aware that the Chief Executive has great responsibilities and a difficult job to do. […] I will make every effort to advance the great practice of ‘one country, two systems’, ‘Macau people governing Macau’ and a ‘high degree of autonomy'”.

Pledging to accelerate the work started by the government on management optimization and to promote the construction of public governance, the CE-elected also claimed he will make an effort to push for an economy moderate diversified development, vigorously supporting the well-being of the people’s livelihood.

During the press conference soon after the election, Ho said that he would start to organize his governance team soon and would listen to various opinions during the process, with remarking his attention on his requirements for the officials.

“Integrity is the priority and I’m particularly concerned with the ability to implement policies and communicate with residents, […] I would not tell you the names of the candidates for future Secretary, nor who will stay and who will leave. I need to take some time to listen to opinions and analyze them. Give me some time”, the CE-elected said.

He emphasized his inclusiveness, claiming to be good in co-operating with different people and, as such, feeling confident to do be able to implement policies with his team.

The CE-elected has to visit Beijing to be officially appointed by the Mainland Central government and will take office on the handover anniversary – December 20, 2019.

The Chief Executive, Fernando Chui Sai On, expressed his congratulations to Ho Iat Seng in a press release, stating he is confident Ho will satisfy the requirements of the Mainland Central government – to always love the motherland and Macau, to be trusted by the Central government and to be able to govern and to be recognized by the Macau society.

The CE believes Ho will be able to lead the new term of Macau’s SAR government and residents to ensure the ‘one country, two systems’ practice to sustain long-term stability and advance a new stage of development, ensuring the current government will provide all support and collaboration needed by Ho to prepare the new government and make a smooth transition.

The Liaison Office of the Central People’s Government in Macau also congratulated Ho’s election as the fifth CE-elected, emphasizing the election’s principles of fairness, impartiality and openness and stating that this election is a clear manifestation of the ‘one country, two systems’, ‘Macau people governing Macau’ and a ‘high degree of autonomy’ practices.

The Liaison Office believes that Ho will be approved by the Mainland Central government, take office and satisfy both the new term of government and residents by keeping his promises for Unity and Efforts, Change and Innovation.

June 28, 2022
Cloaked in darkness and mystery, the creatures of the deep oceans exist in a world...