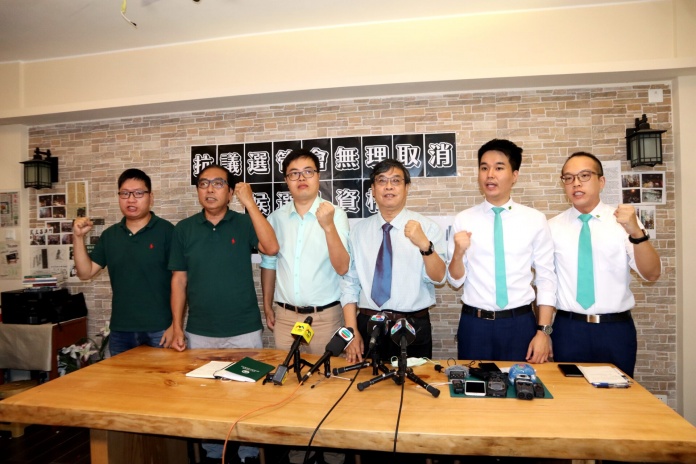 Pro-Beijing Hong Kong newspapers accused pro-democracy candidates excluded from the Macau elections of links to independence movements in Taiwan and Hong Kong, claiming they had attended training camps organized by the CIA, the US secret services.

Chinese state-owned daily Hong Kong Commercial Daily wrote on Tuesday that the reason for the removal of lawmaker Sulu Sou and Scott Chiang from the Macau Legislative Assembly elections was their alleged participation in a “training of ‘color revolution’ [allegedly to instigate uprisings against anti-American governments] of the CIA and Taiwan Military Information Agency in April 2014.”

Sing Tao Daily also wrote that the two Macau politicians are “suspected of anti-China links”, stating that Sulu Sou participated in 2013 and 2014 in a “training camp for young leaders” in Taiwan, “such like Scott Chiang”.

According to the Hong Kong pro-government newspaper, the course “over the years” was attended by pro-democracy activists from the former British colony, such as Joshua Wong and Nathan Law.

The newspaper also claimed that Sulu Sou, Macau’s youngest MP, had “traveled several times to Hong Kong” to support pro-democracy candidates in elections in the former British colony, including Wong, in 2016.

To Lusa, Scott Chiang, leader of the Democratic Macau Prosperous Association, denied having participated in training organized by the CIA in Taiwan.

“I used to participate in an event in Taipei [Taiwan’s capital] with Sulu Sou, but it wasn’t a training, it was an academic conference. I presented the theme of ‘Macau Economic Development’ and ‘Macau Democratic Development’ while Sulu Sou presented other topics, but I have not seen people from the CIA or the Taiwanese MIA [Military Information Agency], nor is it an anti-communist formation,” assured the former deputy.

The process underlying his removal, which he only obtained when he addressed the competent government department, includes allegations of secession and “collusion with foreign countries and forces,” he told Lusa.

The document, with hundreds of pages, includes encounters from “ten and 20 years ago”, “online comments” and ‘screen shots’ of “shared news” on social media, including about Hong Kong, a volume of allegations “impossible to tell, because there are too many”, stressed the pro-democracy politician.

“At this point, I know it is futile to argue with them [authorities]. As I have the right to appeal, I will appeal to the Court of Final Appeal,” he added.

Legislator António Ng Kuok Cheong, one of the oldest parliamentarians in the territory, elected for the first time in 1992, seven years before Macau’s retrocession to China, joked with the size of the process and the “efficiency” with which the evidence against him were obtained, in a publication on the social network Facebook.

“Looking at the information, there are many strange things, but it shows that the authorities are ‘very efficient’; it turns out that the [Electoral] Commission only asked the police for information on July 2nd (not only about me, but about everyone groups and candidates) and the information was provided by the authorities on July 4th; in my case alone, there are more than 200 pages of material, with textual explanations, rich in content, and many strange things,” he wrote.

In the publication, the deputy shows one of the photographs that led to his exclusion, transmitted by the Judiciary Police to the electoral commission: a meeting with the former leader of the Hong Kong Democratic Party and former deputy Wu Chi-wai, detained earlier this year with another 52 activists, accused of violating the national security law imposed by Beijing on the former British colony.

“This photo was interpreted as a meeting with a dignitary defending Hong Kong’s independence,” wrote António Ng Kuok Cheong, one of the pro-democrats currently in the Macau Legislative Assembly.

In comments to the publication, several users satirized the case, sharing photos of meetings of Chinese and American leaders, including the current President of China, Xi Jinping, with former US President Barack Obama.

Lusa tried to hear legislators Sulu Sou and António Ng Kuok Cheong, but they chose to not provide any comment.

On Monday, CAEAL President Tong Hio Fong released seven criteria used to decide whether candidates are eligible, including support for the Communist Party of China, but declined to reveal what violations the removed contestants were accused of.

The three lists in the opposition camp vowed on Saturday to take the case to the Court of Final Appeal.