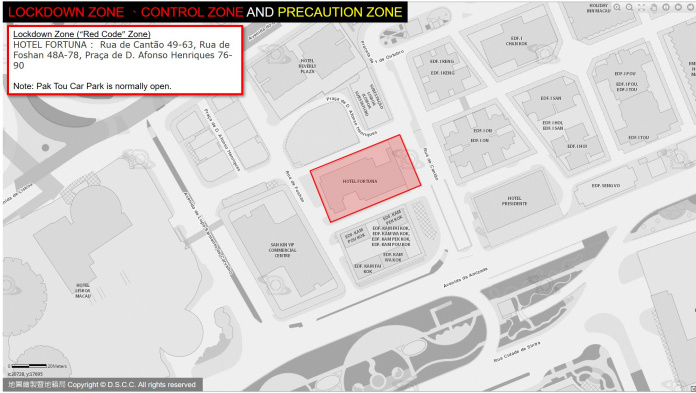 The Hotel Fortuna has been included in the list of Red Code lockdown areas, health authorities revealed.

The property, together with its casino and nearby had been sealed this morning after one of the hotel’s workers reportedly tested positive for Covid.

Security and health officials have been seen carrying out supplies to the hotel in Rua de Cantão 49-63 since it was sealed.

Health officials later revealed that the property had been sealed with about 300 residents and more than 80 staff inside, while the Pak Tou Car Park was re-opened to the public.

Three colleagues of the worker that initially tested positive were also diagnosed with Covid-19 later, while Zhuhai authorities also reported that a confirmed case detected in the Chinese city was a Hotel Fortuna employee, bringing the total to five.

The Macau Pandemic Response Coordination Center added that if the hotel has enough rooms, it will arrange for the guests and staff to be isolated in the original hotel, without a need to transfer them to any other location.

Aside from working staff, no one is allowed to leave the zone but is permitted to enter. Individuals in this zone should minimize their activities and collect daily supplies at the designated spot.

Some 47 confirmed Covid-19 cases have been reported so far, with almost 1,500 people linked to these cases directly or indirectly placed under medical observation.

The most updated Red Code Lockdown Zones include the following buildings:

Meanwhile, the Precaution Zone or Yellow Code Zones are currently the following:

Yellow areas must impose on-site nucleic acid tests immediately, with the first test to be concluded within 24 hours after an area is defined.

Nucleic acid tests are temporarily arranged on the 1st, 2nd, 3rd, 5th and 7th days and no one is allowed to leave the zone, with border exit restrictions, close health monitoring and self-health management for at least 14 days also requested.