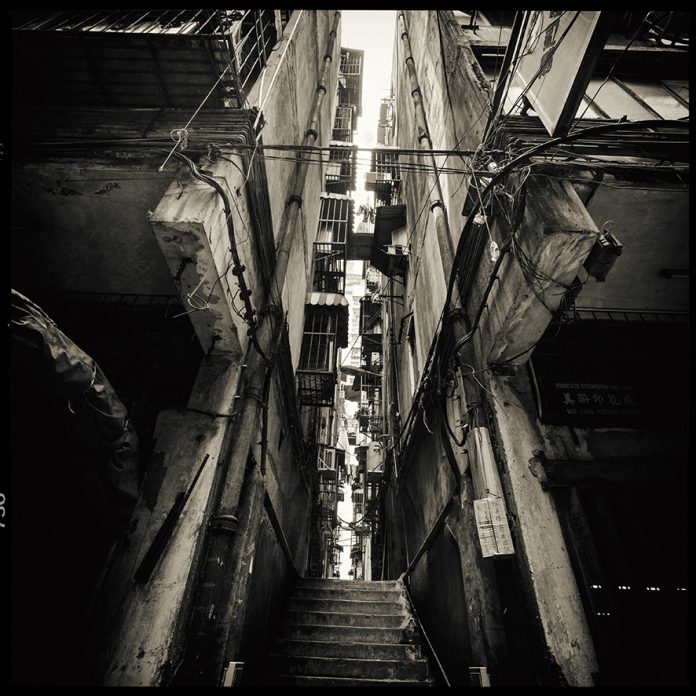 Macau authorities first announced plans to attempt to develop the ageing estate in 2004, but only after the Urban Planning Committee was founded in 2016 and the Macau Urban Renewal, a public company in charge of urban redevelopment was created in 2019 could the renewal finally advance.

The estate built in the 1970s includes 2,566 residential and non-residential units in its seven blocks, with a survey commissioned by MUR estimating that 12,014 people live in the estate, making it the most densely populated property in the city, with an average of 5.3 persons per unit against the local average of 3 persons.

The local area plan for Iao Hon Estate has been preliminarily completed by MUR, with representatives from the public company responsible for urban renewal recently visiting Iao Hon property owners to brief them about the plan and collect views and suggestions.

‘Iao Hon Estate is MUR’s first urban renewal project. As issues with the building blocks there are wide-ranging, it is necessary that aspects of different levels are factored in when drawing up the local area plan, including gauging property owners’ views and ensuring that they are compatible with the urban master plan,’ the company noted.

The Macau SAR 2020-2040 Urban Master Plan – which provides for about three square kilometres of new land gained from the sea, new housing, commercial, tourism, green areas or public spaces – came into force on February 15 of this year.

According to the group, the stock optimisation approach means that for Iao Hon Estate, the redevelopment will take place under the premise of not increasing the density of resident population nor the number of households.

‘The plan, covering the seven plots of land that form Iao Hon Estate, adopts a vertical city concept, where low-rise buildings are transformed into high-rise buildings that consist of underground car parks, podiums and residential towers. Some of the podiums will have setback areas to create platforms for greening. Greening initiatives would be extended throughout the neighbourhood through the vertical greenery system and greening on footbridges and pedestrian streets,’ the company added.

The plan also proposes for the provision of footbridge connections between malls on the podium levels to improve the area’s business environment and place-making, with two 16-metre-wide intersecting pedestrian streets that would connect to the urban master plan’s pedestrian system, providing links to the nearby border crossing checkpoints and improving the local pedestrian network.

According to the company, consulted property and business owners in the estate hope the pace on securing enough ownership for redevelopment to start could be ‘accelerated’ so that the areas urban renewal process can advance.

Under a proposed new urban renewal law, the percentage of consent required from property owners to proceed with the reconstruction of buildings should be defined by the age of the building so, in the case of buildings aged 30 years and over and below 40 years, it would be necessary to obtain the consent of 90 per cent of the owners.

Although almost 91 per cent of owner-occupiers either strongly supported or just supported the redevelopment, only 37 per cent were willing to bear fully or partially the costs of the renewal, the study commissioned by MUR showed.