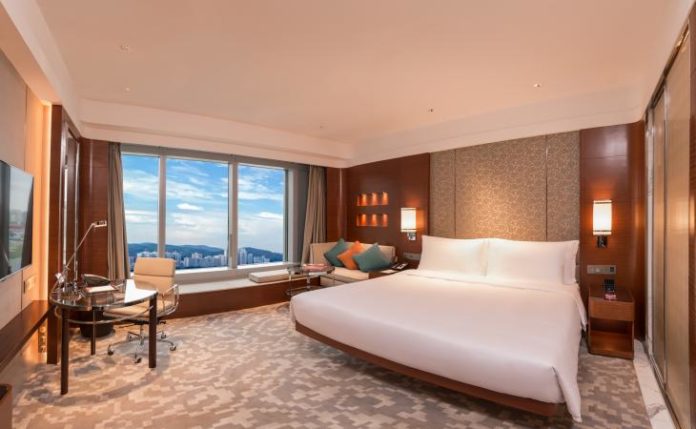 InterContinental Hotels Group (IHG), who run the Holiday Inn and Crowne Plaza hotel group operations in Macau, have posted total gross revenue from the groups hotel system  including franchising  of US$11.9 billion as well as a 3.6 per cent net room growth year-on-year for the first six months of this year, according to the interim results published by the group on their website.
IHG operates, franchises or manages a number of brands including the InterContinental, HUALUXE, Crowne Plaza, Hotel Indigo and Holiday Inn within greater China, as well as operations throughout Europe including the Staybridge brand. In America they have the EVEN, Kimpton and Candlewood Suites brands and properties in AMEA (Asia, Middle East and Africa) amounting in total to 749,721 hotel rooms in 5,070 hotels. Some 4,243 of these are franchised, with 820 managed and 7 owned and leased by the company.
The group saw a profit attributable to shareholders amounting to US$20 million for the six-month period, a 45 per cent drop compared to the same period of 2015.
China
For the first half of this year the group saw growth of 4.7 per cent in Mainland China and comparable RevPAR (revenue per available room) increasing 2.4 per cent for the six-month period. However, these were offset by continued declines in Hong Kong and Macau, notes the report.
The groups approach to the region is particularly focused on the Mainland market, where it plans to maximise our long term growth potential by using our mainstream brands to penetrate less developed cities. The results of the strategy has pushed profit up 38 per cent driven by strong trading in Mainland China, double digit year-on-year system growth and US$3 million managed fee contribution from InterContinental Hong Kong, which was sold on 31 October 2015, notes the report regarding its China segment.
The sale of property also impacted reported revenue and operating profits, which saw a 53 per cent and 41 per cent decline, respectively, for the regions results.
The group currently operates 83,330 rooms through 271 hotels in the Greater China (including Hong Kong and Macau) region, with a further 62,185 rooms through 222 hotels in the pipeline.
Whilst there continue to be political and economic uncertainties in some regions, our geographic diversity and resilient business model, together with current trading trends, leaves us confident in the outlook for the rest of the year, notes the report.

WHO tells UN: now back words with action on vaccines