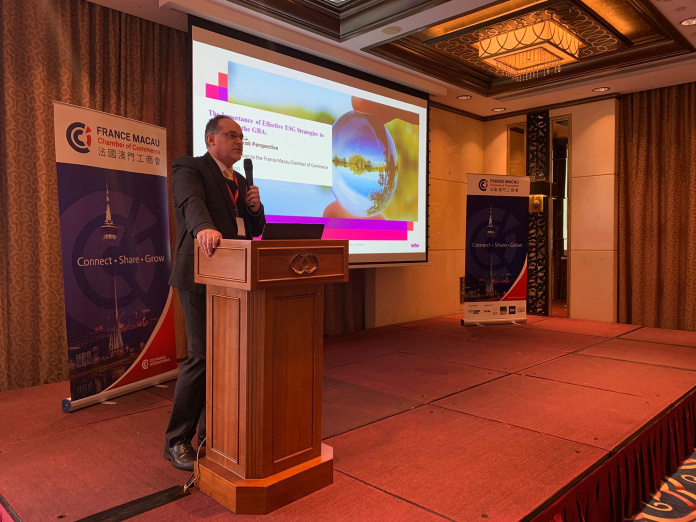 Companies in industries in the SAR can look to Environmental, Social, and Governance metrics as an important tool to help them reduce their impact on greenhouse emissions, Vincent Mossfield, Liability Risk Practice Regional Director Asia at WTW Hong Kong, Macau Branch stated to Macau News Agency.

Mossfield made the comments after holding a talk titled ‘The Importance of Effective ESG Strategies in Business in the GBA’ hosted today (Wednesday) by the French Macao Chamber of Commerce.

Environmental, Social, and Corporate Governance is an evaluation of a firm’s collective conscientiousness for social and environmental factors, taking fiduciary duty, externalities, disclosures, and other important ESG issues into account.

“Both Macau and the Chinese governments have already started to refer to ESG and sustainable type issues in their requirements for major industries that they are responsible for, particularly when it comes to the gaming industry in Macau,” Mossfield told MNA.

“Within Macau and the GBA there’s a greater understanding that ESG reporting needs to be more thorough, detailed and financially accountable in order to address the climate change greenhouse gas emission targets that governments are setting for themselves”.

Mossfield noted that some of the major industries that have already implemented sustainable development departments and personnel have plans in place to address their environmental and social responsibilities.

“I think this is a good step and a good temple for industries in Macau that are looking at the impact of climate change to recruit expertise, educate their own staff and prepare transition plans. If they are GHG emitters they need to look at a transition plan from high to low levels of GHG emissions that comply with COP26 or the Paris Agreements,” the consultant added.

The Macau SAR Second Five-Year Plan for Economic and Social Development for the 2021-2025 period emphasizes that authorities will advance efforts to reach peak carbon emissions before the previous target in 2030, and aim to make the city a ‘low carbon emission center’.

Chief Executive Ho Iat Seng had indicated previously that the SAR would follow the country’s environmental goals, namely, to reach peak carbon dioxide emissions by 2030 and become “carbon neutral” before 2060.

A recent study involving Macau University of Science and Technology (MUST) researchers considered that in an ideal scenario, greenhouse gas emissions emitted by the Macau SAR could be slowed down and peak in 2033.

According to the report as of 2018, the Macau SAR gaming industry contributed to 38 per cent of GHG emissions from energy consumption followed by transportation with 29.3 per cent and households with 14.6 per cent.