The inflation rate in Macau has increased to 2.62 per cent in April, data published by the Statistics and Census Bureau (DSEC) today revealed.

Increases in the average general Consumer Price Index (CPI) were attributed to increases in the prices of education (+5.39 per cent), transport (+4,16 per cent) and food products and non-alcoholic drinks (+4.68 per cent).

The CPI rose 2.05 per cent year-on-year due to a rise in increase in prices of fresh pork and meals purchased away from home, as well as by the rise in household rents.

A MMOP2.1 billion (US$262.8 million) consumer e-voucher scheme was initiated on May 1 with Secretary for Economy and Finance Lei Wai Nong having said before that an evaluation would be carried out to assess if the scheme led to an increase in local inflation before a planned MOP3.6 billion new consumer voucher round starts in August. 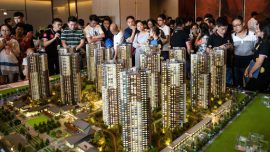