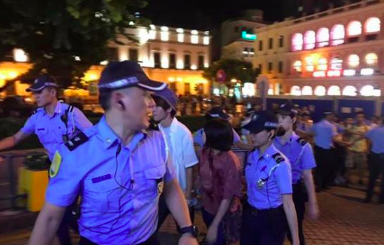 The Macau Journalist Association (MJA) issued a statement in which it revealed that it has received complaints from journalists in local Chinese-language media outlets accusing senior management of not allowing reports on the failed protest against the Hong Kong police action and on the Judiciary Police (PJ) operation at the Senate Square on August 19.

The association condemned this kind of interference in reporting and described it as destroying the credibility of local media.

“We have received complaints from front-line reporters that senior officials in their company asked them not to report and publish scripts and pictures of the situation [at the Senate Square on August 19]. The facts seem to show that several Chinese newspapers only reported the police press notes but did not mention anything about the on-the-scene situation that night,” the MJA said.

The Public Security Police Force (CPSP) rejected a request for holding a silent vigil at the Senate Square on August 19 against the conduct of the Hong Kong police during public protests.

However, police authorities still held a large police operation that night, conducting several ID checks of people in the area and detaining seven people for questioning as part of a ‘preventive operation’.

The association remarked that since the anti-extradition bill public protests started in Hong Kong in early June, rumours emerged that Chinese media in Macau attempted to ‘downplay’ the issue.

The MJA also worried that external powers had been intervening in the local freedom of the press and exploiting the public’s right to be informed.

According to a previous report of All About Macau, some reporters in the TDM Chinese channel had submitted anonymous complaints about senior officials intervening in their reports concerning the unrest in Hong Kong.

“They asked reporters to choose scenes where protesters are confronting the police, and required editors to cut or delete scenes in which the Hong Kong police used tear gas or was being criticised,” the report cited.