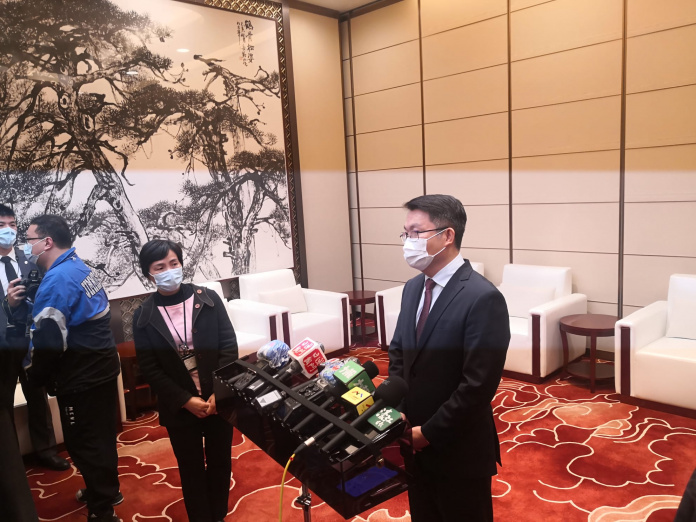 Secretary for Economy and Finance Lei Wai Nong stated today (Monday) that agreements between junket operators and gaming concessionaires concerning VIP rooms activities will still be allowed in the future if they “fulfil all legal requirements”.

“We have a legal framework that allows for the relationship between gaming operators and junkets if everything is done according to the law,” the Secretary said after a ceremony to celebrate the 22nd anniversary of the establishment of the Macau SAR.

The junket sector in the city has recently taken another hit after the high-profile arrest of Alvin Chau, the head largest VIP gaming promoter in the SAR, Suncity, last month on alleged charges of running a criminal syndicate, illegal gambling and money laundering activities, involving proxy betting in the Philippines.

The arrest was carried out locally shortly after a warrant for Chau was issued by the Mainland Chinese city of Wenzhou, accusing him of enticing the mainlanders to engage in illegal cross-border gambling activities.

Locally licensed junket operator Sun City Gaming Promotion Company Limited announced it has officially been wound up since Friday, following the closure of all its VIP rooms in the city on December 1.

Gaming promoter Tak Chun – considered the second largest to operate in Macau – also announced in an internal statement that some ‘individual casinos’ will temporarily suspend their cooperation relationship with them, with workers to be dismissed.

So far Wynn Macau, Sands China and Melco Resorts are believed to be planning to gradually close VIP rooms run by junkets from December 20, while SJM Resorts and Galaxy Entertainment Group are said to have decided to maintain their current cooperation agreements with junket operators.

The secretary added that labour authorities have received notifications from gaming concessionaires that adjustments have been made concerning their agreements with junket promoters.

“Gaming tables numbers also have changed but so far the information is still not very clear. The Gaming Inspection and Co-ordination Bureau (DICJ) has requested operators for more details and explanations, later will have clearer information,” Lei noted.

All current junket operator licences will expire by December 31 with requests having to be sent to the DICJ for renewal this month.

The document proposed increased penalties against accepting cash or other deposits illegally by promoters, with gaming concessionaires bearing legal responsibility in case of infractions by junket operators with whom they have agreements.

“Junket promoters have always been important and we will make adjustments in the future. If they fulfil all required conditions we will accept and evaluate the request. We will proceed according to the existing regulations,” Secretary Lei noted.

“I believe there will be an adjustment cycle. We will continue adjusting in the future. We are mainly focused on the issue that VIP rooms closures do not impact croupiers, supervisors, security employees. As for the workers directly employed by junkets. we will proceed in the best way. That responsibility cannot be transferred to society”

The Secretary also noted that until yesterday the Labour Affairs Bureau (DSAL) had received requests 461 assistance requests concerning 442 employees previously employed in one junket operator, including compensation requests and requests for help in finding new employment.

DSAL was said to have arranged special job matchmaking sessions for 200 people, with some 96 attending them.

“Until now gaming concessionaires and VIP gaming promoters have some contracts and some adjustments have been done. If adjustments are made they have to inform the DICJ. Those adjustments have to respect the labour rights of the employees, which have to be safeguarded”.

The Secretary had previously indicated that although the closure of some VIP rooms and junket operations will undoubtedly impact the local unemployment rate, the local gaming sector is still moving towards a “healthy and sustainable development”.

Local analysts and gaming researchers also expressed contrasting opinions to Macau News Agency on whether the junket sector will still have a role in the future gaming sector in the SAR, after the repeated ‘hits’ the sector took this month.

August 16, 2022
The United Nations on Monday implored the world to not forget the plight of Afghanistan's...
Load more