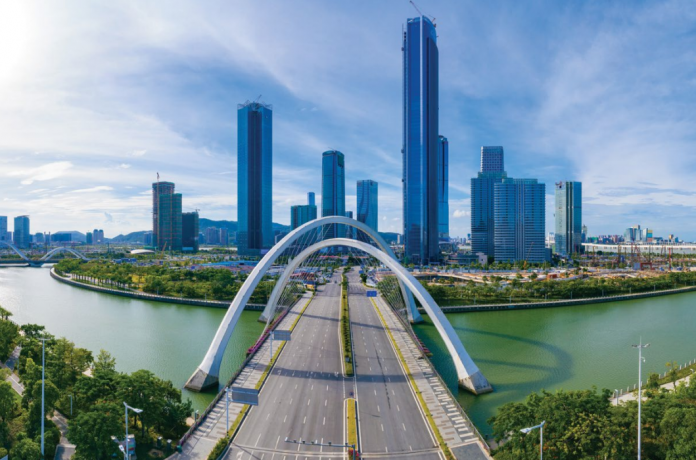 The proposed salary subsidy for Macau residents working in nearby Hengqin is seen as a key measure and initiative the authorities should roll out to encourage more Macau workers to jump on this northbound train.

The past few months have been a busy time period for Alex Chong, a Year 4 student of business administration at a local university, as he has to focus on his studies and look for a full-time job at the same time. “I have attended some career fairs and sent [my] CV [curriculum vitae] to numerous firms, but there has not been any success so far,” he says. “It’s expected because of the current [economic] climate.”

The predicament in the current local job market, however, does not deter the graduate, who has no intention to look for opportunities beyond Macau so far; for instance, nearby Hengqin Island in Guangdong province, which has been advocated as the wonderland for the diversifications and development of the city. “For now I think I will have a better career prospect here — there is still a question mark about the development of Hengqin,” he remarks.

Despite the recent push by the authorities to encourage more Macau residents to work and develop their career in the nearby island, including offering financial incentives, the sentiment of Alex is still shared by quite a few in the territory, particularly youngsters. Several surveys compiled by local institutions have shown that while the local population overwhelmingly supports the development of the nearby island and the integration of the territory into the Guangdong-Hong Kong-Macau Greater Bay Area, the interest has waned when talking about working across the border.

A survey about the youths’ ideological trends by the Macau University of Science and Technology last year shows that 75 per cent of Macau young people aged between 15 and 40 believed there was “a great prospect” of development in Mainland China. About 46 per cent of them were willing to try working in the mainland, but over 80 per cent of them were more inclined to stay and work in Macau, the survey said. Another research undertaken by the University of Macau and the Macau Young Entrepreneur Incubation Centre last year found that about 30 per cent of residents aged between 15 and 34 were willing to work or start up businesses in the mainland cities of the Greater Bay Area — but most of those who said yes only had monthly income lower than MOP12,000 (US$1,500) at the moment.

A salary gap between Macau and most mainland cities and the differences in the work cultures are attributed as some of the major reasons preventing Macau residents from seeking career opportunities in Hengqin and other mainland cities. In a bid to attract more locals to venture across the border, the authorities have recently attempted to come up with some possible solutions.

Following the inauguration of the Guangdong-Macau In-depth Cooperation Zone in Hengqin last September, in which both the Guangdong and Macau administrations are allowed to co-govern and shape the future of the place, the nearby island proposed in January 2022 that financial incentives would be rolled out to support the employment of more Macau residents. A monthly subsidy between RMB5,000 (US$785/MOP6,315) and RMB12,000 would be given to Macau residents who work full-time in the cooperation zone for at most three years, in addition to a one-off bonus of RMB5,000 for Macau residents who are employed in Hengqin for the first time, the proposal said. For companies in the cooperation zone that employ Macau residents, an annual subsidy of RMB30,000 per Macau employee would be granted to the enterprises for at most three years, and a one-off bonus of RMB200,000 would be awarded to them should they hire over 30 Macau workers.

“If this proposal could be implemented in the near future, this could definitely encourage more Macau residents to look for job opportunities in Hengqin… as one of the reasons that affect their willingness to work in Hengqin is the salary gap between the two places,” said legislator Leong Sun Iok from the Macau Federation of Trade Unions, the city’s largest labour group. Official figures show the median monthly earnings of Macau residents stood at MOP20,000 by the fourth quarter of 2021, while the monthly earnings in Zhuhai — which includes Hengqin — averaged RMB8,348 (MOP10,609) in 2021.

“This could also help relieve the unemployment situation in Macau,” he remarks. Due to the Covid-19 pandemic that has wrecked turmoil in the local economy for over two years, the latest government data show the unemployment rate for residents hovered at 4.2 per cent in the three months ending January 2022, the highest since the third quarter of 2009 during the global financial crisis. The unemployment was exacerbated in the group aged between 16 and 24, whose jobless rate stood at 13.1 per cent in the last quarter of 2021.

“Besides offering financial incentives like [a] salary subsidy, the government should also help train residents [in] the vocational skills required for the major sectors of the cooperation zone [in Hengqin] so that more residents will be motivated to develop [a] career across the border,” the lawmaker adds, referring to scientific and technological research and high-end manufacturing; traditional Chinese medicine (TCM); cultural tourism, convention and exhibition, and trade; and modern finance that are flagged as the four major sectors of the cooperation zone. For instance, the authorities could roll out vocational courses or programmes in these four areas for fresh graduates, he suggests.

Apart from the proposed financial incentives, the Macau Labour Affairs Bureau and the Hengqin authorities launched a one-month campaign by the end of last year, creating an online platform for job opportunities between Macau residents and enterprises in the cooperation zone. According to the bureau, more than 80 firms in the zone participated in the campaign and offered about 450 job positions, but only 185 residents had submitted job applications by the end of January in the areas of TCM, high-end manufacturing and tourism.

Mr. Wong, an office worker in his late twenties in a local association, adopted a wait-and-see approach for developing a career in the nearby island. “Taking account of the proposed financial subsidy, the monthly earnings for a job in Hengqin will just be about some MOP10,000 and MOP20,000,” he says, who wants to be identified only by his family name. “This salary level is attractive for fresh graduates or those that have just worked for a few years, but not for those that have worked for a certain time period.”

Further loosening the customs procedures between the two places for Macau workers in the nearby island is also a must, he says. For instance, a negative nucleic acid test result issued within 24 hours is now required to cross the border in prevention of the spread of the coronavirus. “The border had also once been closed for some days during the worst pandemic situation [in 2020]. These all are troublesome if I have to travel to and fro between the two places for work everyday,” he illustrates.

In the perspective of local young entrepreneur Hazel Huang, who is now running a healthtech start-up, Trendyi Health Technology, in both Macau and Hengqin, the types of jobs available in the cooperation zone are the key to attracting Macau employees. “If there are some well-known mainland Chinese or international firms providing job openings in the cooperation zone, the local youth will definitely be interested in exploring the opportunities,” she says.

Acknowledging the cooperation zone is still in the developmental stage, she addresses: “When the industries in Hengqin are more developed alongside with more companies offering different types of jobs, Macau young people will be more motivated to work in the island.”

According to the Statistics Bureau of Hengqin, the gross domestic product (GDP) of the cooperation zone expanded 8.5 percent year-on-year to RMB45.46 billion (MOP57.42 billion) in 2021, or about a quarter of Macau’s GDP, which reached MOP239.4 billion over the same time period. As of the end of 2021, a total of 54,437 companies were incorporated in the cooperation zone, including 47,071 firms backed by the capital from Mainland China and 4,761 firms backed by the Macau capital, while the size of the employed population on the island reached 66,656, increasing by 8 per cent from the end of 2020, the data said.

Lawmaker Che Sai Wang thinks the proposed financial incentives might not be appealing enough to encourage more Macau workers to jump on the northbound train. For example, he suggests: “The authorities should think about whether accommodation or housing allowance could also be provided so that they don’t have to cross the border every day for work.”

The information transparency of the job market in the nearby island could also be improved. “The government could publicise the relevant information, such as the number and types of job openings in Hengqin, from time to time for Macau residents to be better prepared if they are interested in venturing across the border,” Mr. Che adds.

The Macau Labour Affairs Bureau pledged in a recent statement that it would “continue [to] review and optimise all types of support measures to provide more convenience for Macau residents, including young people, to develop their career and start up business in the in-depth cooperation zone”.

In cooperation with social institutions and the Hengqin counterparts, the Macau authorities would provide a wide array of vocational training programmes for residents “to enhance their competitiveness in the job market and resilience for different workplaces,” the bureau says. Through coordination with the Hengqin authorities, the Macau government would also provide job information promptly to residents who are interested in career development in the cooperation zone, as well as organise visits and internship programmes for them to have a better grasp of the Hengqin environment, it adds.

While university student Alex Chong has so far not enjoyed success in his job hunt, he has a back-up plan as graduation is imminent. “I’ve also applied for postgraduate programmes in different local schools. If I still could not find a full-time job anytime soon I could continue my part-time job and study at the same time,” he illustrates.

“Should there be a prosperous and appealing business scene in Hengqin by then, I don’t mind going [trying to work] there when opportunities arise,” he adds.