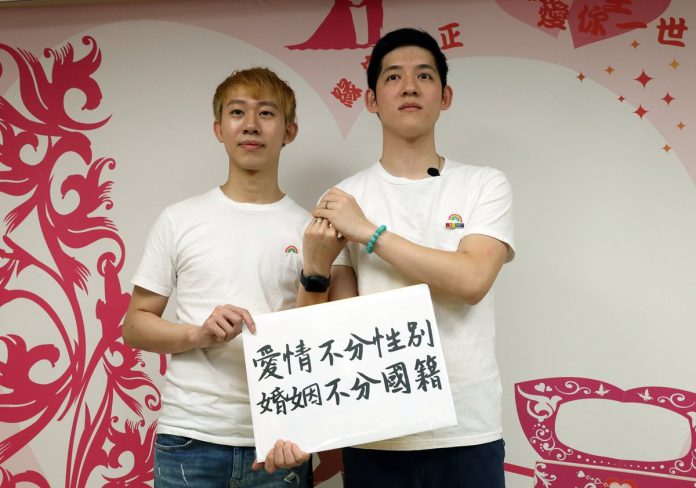 A local Macau resident who is fighting to get his same-sex marriage legalised in Taiwan has told MNA that legal precedent gives him hope that his attempts will be successful.

Same-sex marriage was legalised in Taiwan in May of this year, making it the first Asian jurisdiction to do so. However, marriage with Taiwanese nationals is not allowed for residents of jurisdictions that do not recognise gay marriage, and the Macau SAR is one of those jurisdictions.

Leong Chin Fai – a 31-year-old local resident – studied clinical psychology at Fu Jen Catholic University in New Taipei City, after which he met his partner, ShinChi Ting. The couple have been dating since 2015.

“During the first two years of dating, we were a long-distance relationship, and we flew to meet another side one to two times per month. After that, I moved to Taiwan in 2017,” Leong told MNA.

Leong gave up his job as a psychologist in Macau and moved to Taiwan. The couple have been living together ever since and have been hoping that the dogged efforts to make same-sex marriage legal in the region would someday succeed. It finally happened this year.

Leong stated the couple first attempted to register their union on the day gay marriage became legal in Taiwan on May 24, but the application was refused due to his nationality.

This led the couple to start a legal action to see the marriage recognised; they had the help of their voluntary lawyers and the Taiwan Alliance to Promote Civil Partnership Rights.

This Taiwanese organisation has been fighting since 2009 for LGBTIQ people in Taiwan to have the right to get married and to have systematic legal protections — just like their heterosexual fellow citizens do.

Under the 46th article of the Taiwanese Act Governing the Choice of Law in Civil Matters Involving Foreign Elements, it is mandated that the “formation of a marriage is governed by the national law of each party.” However, the 8th article of the same act also notes that “if the result of such application leads to a violation of the public order or boni mores of the Republic of China [Taiwan], that law of the foreign State is not applied.”

On October 1 – China’s National Day – the couple again tried to see their union officialised at the civil registry in the Taiwanese city of Hsinchu as part of its administrative appeal to the authorities, with the request again being rejected.

Leong stated to MNA that the couple hopes that a previous legal interpretation concerning marriage between a Cambodian woman and a Taiwanese man could provide the necessary legal precedent to see their union recognised.

Cambodia has a ban on marriages between its citizens and those of several countries, including Taiwan, as part of an effort to prevent human trafficking; however, in October 2016 the Taiwanese Ministry of the Interior exempted Taiwanese and Cambodian couples from the marriage law of Cambodia under certain conditions.

“There was a similar situation as transnational marriage before between a Cambodian woman that wanted to get married to a Taiwanese man […] Cambodian law forbid in this situation, but the Taiwanese government made an administrative interpretation of the 8th article of the Act and accepted their marriage,” Leong told MNA.

Leong also indicated to MNA that the issue of gay marriage is actually a human rights international issue, and that the legal battle faced by the couple raised hopes for other gay couples in Macau and worldwide that their unions will be made official in the eyes of the law.

“We do not only stand for Macau but also stand for all around the world where homosexuals might have a Taiwanese spouse, including Malaysia, Hong Kong, Japan, Korea, Philippines, Vietnam, Middle Eastern countries, etc,” he told MNA, adding that if their legal challenge is successful the couple will try to promote the same civil unions in Macau

Anthony Stephanos Lam, the head of local gay rights group Rainbow of Macau, also underlined to MNA that “surely couples with a non-Taiwanese partner will benefit” from Leong’s success if achieved and believed same-sex marriage will one day be recognised in Macau.

August 16, 2022
Lawyers for WikiLeaks founder Julian Assange sued the US Central Intelligence Agency and its former...

August 16, 2022
The United States announced it had imposed corruption-related sanctions on several senior Liberian officials, including...

August 16, 2022
Rebels killed three people, including a soldier and a police officer, in Cameroon near a...