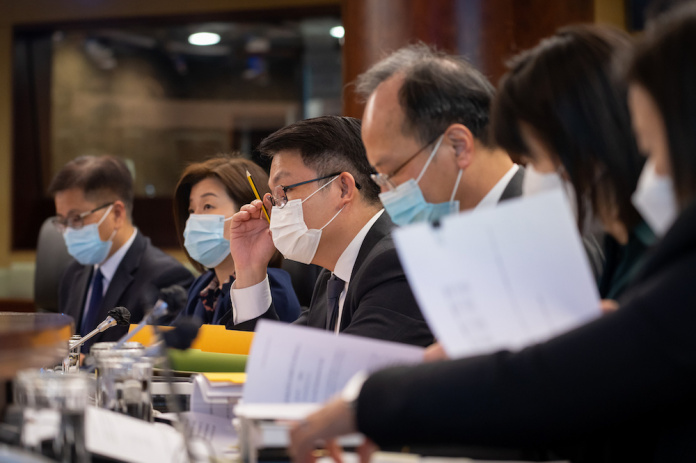 The Macau Legislative Assembly today (Thursday) approved an injection of MOP6.3 billion (US$784.4 million) into the budget, once again drawing on the region’s financial reserve to make up for the loss of tax revenue from the gambling business due to the Covid-19 pandemic.

This third revision of the 2021 budget was unanimously approved by members of the assembly.

During the presentation of the amending budget, Secretary for Economy and Finance, Lei Wai Nong, said that this new injection was justified because of the drop in revenues from casinos in what is the world’s gambling capital.

He referred to the “special gaming tax as the main source of revenue for public finance, whose accumulated value to the end of October was only around MOP26.5 billion, not reaching sixty percent of the respective budget execution rate.”

The government had forecast gross gaming revenue of MOP130 billion for this year as a whole, but last week acknowledged that the figure would be nearer MOP86 billion.

Since the start of the pandemic in early 2020, Macau’s government has already injected about MOP90.8 billion into the budget, drawn from the extraordinary financial reserve.

On 4 November the Legislative Assembly approved the use of MOP2.3 billion patacas from the reserve to provide the funds to implement support measures enacted during the economic crisis caused by the pandemic.

In April, the government had already dipped into the reserve to the tune of 9.1 billion patacas; that was after the initial 2021 budget already included an extraordinary injection of 26.6 billion.

Of gross gambling revenue, 35 per cent goes to the government’s coffers.

Gambling represents about 80 per cent of government revenues and 55.5 per cent of Macau’s gross domestic product. The industry provides work for more than 80,000 people, or 17.23 per cent of the employed population.

In the first 10 months of this year, Macau recorded 6,083,773 visitors to the territory, when before the pandemic the monthly figure averaged around 3 million.

At the beginning of this year, there was an expectation of a revival in tourism from mainland China, with the resumption of the issuing of individual visas.

Macau has recorded only 77 cases since the start of the pandemic. It continues to have tight border restrictions in place and requires mandatory quarantine on arrival that can last up to 35 days.

November 29, 2021
South Africa on Monday said it was "regrettable... (and) sad" that fellow African nations had...
Load more