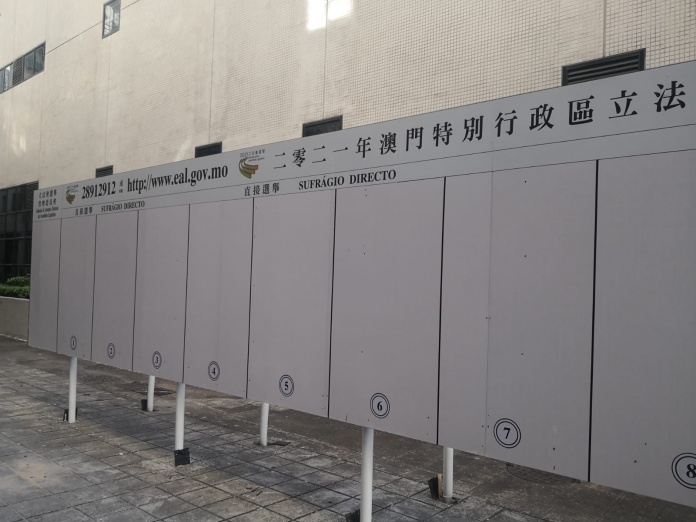 Measures will be implemented control of the flow of people in a delimited area of Praça do Tap Seac from 11:00pm of today, with a maximum of 10 representatives for electoral lists in the direct and indirect elections to be allowed and with a pass issued by CAEAL required to enter the area.

The control area will have two entrances and exits, one adjacent to the corner of Rua de Afonso de Albuquerque and the other opposite the open-air car park of the former Hotel Estoril.

The number of media and campaign workers will also be limited.

Candidates are required to take body temperature measurements and verify the health code of all participants in the campaign initiatives, refusing entry to individuals with fever or respiratory tract symptoms.

They must also ensure “that the number of people does not exceed the maximum limit where the campaign actions will take place, and all people must wear a mask and keep social distance.

More than 325,000 voters are called to vote in the elections for the Legislative Assembly (AL) on September 12, with the electoral campaign extending up to two days before voting.

The new AL session between 2021 and 2025 will include 33 legislators, among which 14 will be elected by direct suffrage, 12 elected by indirect suffrage and seven others appointed by the Chief Executive.

This year – and for the first time in the SAR history – five lists and 20 candidates, 15 of which are associated with the pan-democrat camp, have been excluded from taking part in the elections for “not defending the Basic Law of the Macau SAR” and not being “faithful to the Macau SAR”.

In a recent reply to an inquiry by legislator Ng Kuok Cheong – one of the excluded candidates – CE Ho Iat Seng guaranteed the independence of the court and the commission that managed the elections and defined patriots as those who defend “national interests in matters of security and development”, do not “carry out acts that harm national security” and “respect and defend the country’s regime and the constitutional procedures of Macau”.