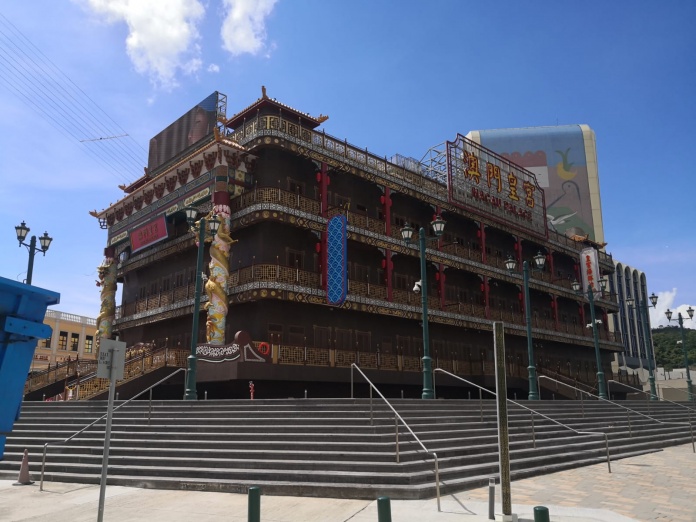 Lisboeta Macau is already ready for a partial opening on July 17 offering a few shopping and dining facilities and its skydiving and zip line attractions, but with its hotel areas remaining as a quarantine facility.

The new resort property in Cotai will open up its GoAirborne Indoor SkyDiving attraction, the ‘first indoor skydiving experience in Macau’, a 388-meter long zip line named ZIPCITY; and the Lisboeta night market next to the Macau Palace, a replica of the historic floating casino.

These three main attractions will be open from Thursdays to Sundays, with the GoAirborne and ZIPCITY attractions open from 2:00pm to 10:00pm and the Nigh market Lisboeta open from 5:00pm to 10:00pm, the property developer Macau Theme Park And Resort (MTPR) indicated in a media tour held today (Wednesday).

GoAirborne Indoor SkyDiving is the first indoor skydiving facility in the city, with a fully frameless glass tunnel spanning 4 metres in diameter and standing 15 meters tall to simulate a flying experience.

First-time flyers as young as 4 years old can use it, with the regular flight lasting for 90 seconds but with training and membership packages that offer a longer experience.

The resort is divided into a ‘Retrospective Zone’ which attempts to replicate the city’s development since the 1960’s and a ‘Futuristic Zone’ showing a possible future vision of the city.

The property features elements inspired by local iconic buildings such as Hotel Estoril, the floating casino “Macau Palace” and the New Central Hotel, with an Old Macau street also including remembrance elements of the shuttered Yat Yuen Canidrome and the former Jai-Alai Hotel.

The Lisboeta Macau Hotel itself is a 12-storeys tower with the building’s arch details and mosaic facade inspired by Hotel Estoril, Stanley Ho’s first integrated resort in the city.

The replica of the famous floating casino known as ‘Casino Macau Palace’ or ‘Casino de Macau’ – which featured in the 1974 James Bond classic film ‘The Man with the Golden Gun’ – is decorated with ornate Chinese carvings, wood mouldings and is surrounded by an artificial lake.

Right in front of the replica floating casino will be the Night Market, a food market area with a live concert stage.

The original floating casino remains out of business and anchored in the Inner Harbor, in the north western part of the Macau peninsula.

The ‘Futuristic Zone’ will include a futuristic themed shopping mall with retail shops, a food court and other entertainment leisure attractions, with a glass canopy, a replica ‘Bord Cage’ and LED lightbulbs to recreated Macau’s landscape.

While it has not been confirmed by MTPR if any casino will operate within Lisboeta, the Chief Executive of Macau casino operator SJM Holdings Ltd, Ambrose So Shu Fai, in 2019 admitted the possibility of a satellite casino operating in agreement with the gaming concessionaire to be included in the property.

Lisboeta is in close proximity to SJM’s future first Cotai integrated resort, Grand Lisboa Palace, which is expected to open in the third quarter of this year.

SJM management had also previously admitted it would look into creating synergies between its gaming resort Grand Lisboa Palace and Lisboeta, which could include the building of a connecting bridge between the two properties.

Lisboeta was granted a four-star hotel license by the Macau Government Tourism Office (MGTO), in August, 2020, with several of its food & beverage outlets also receiving the necessary licensing.

The Lisboeta Hotel will also include 820 guestrooms with three unique themes – Lisboeta, LINE FRIENDS presents CASA DE AMIGO and Maison L’Occitane – however, most rooms will still be used for medical observations, with the opening attraction separated from the quarantine area.

Other entertainment attractions to be included in the future will include Emperor Cinemas, Guia Electric Karting Macau’s first mega indoor electric karting and outdoor event space.