Former Wynn Macau CEO, Steve Wynn, has stated in an interview that he believes that right after travel restrictions imposed by Mainland China on travel to Macau are lifted the local gaming market will bounce back “rapidly”.

Speaking in an interview with FOX Business, Wynn stated that US gaming operators with a presence in Macau will have a faster business rebound to the effects of the Covid-19 pandemic, pointing as an example to thousands of Chinese tourists who have visited Henqgin’s large amusement park resorts shortly after their re-opening.

“That’s the kind of energy that has been suppressed and will jump out. I believe there will be business and that people are going to come back, hopefully, they will do it safely,” Wynn stated.

The businessman also noted that while Macau had 50 million people right next door and within driving distance in Guangdong province just waiting for border restrictions to be lifted, Las Vegas depended much more on air travel.

Following several allegations of sexual misconduct, Wynn resigned as chairman and CEO of Wynn Resorts and Wynn Macau in 2018, with the interview being one his first since then.

The number of visitors in the first four months of 2020 went down by 76.6 per cent year-on-year to about 3.2 million, with Mainland China visitors going down by more than 70 per cent to some 2.3 million.

Meanwhile, gross gaming revenues have dropped by almost 68 per cent year-on-year in the first four months of this year to some MOP31.2 billion (US$2.9 billion).

Mainland China, Macau and Hong Kong have maintained discussions about reducing travel restrictions and quarantine requirements this month but no new information on when individual travel or tour group visa issuances may be resumed.

Wynn indicated that 65 or 70 per cent of Wynn Resorts profits were generated by its Macau SAR operations through Wynn Macau, with Las Vegas Sands and MGM Resorts International the other US-based gaming concessionaires, with Sands China and MGM China.

All three local gaming concessionaires have reported a large drop in revenues in the first three months of this year as the usual Chinese tourism flows were halted due to the pandemic.

Wynn Macau in specific has reported some US$154.1 million in losses for the first three months of this year, a turn from the US$190.6 million in net profits it had reported during the same period of last year

Las Vegas hotels and casinos have been closed since mid-March as part of the country’s measures to contain the pandemic, but they will be able to start taking reservations as soon as June 1.

Wynn considered that for some US gaming operators the Covid-19 financial hit could be “permanent” but that a clear picture would only be possible after the set timelines for resuming hotel operations. 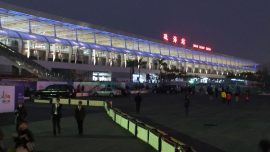