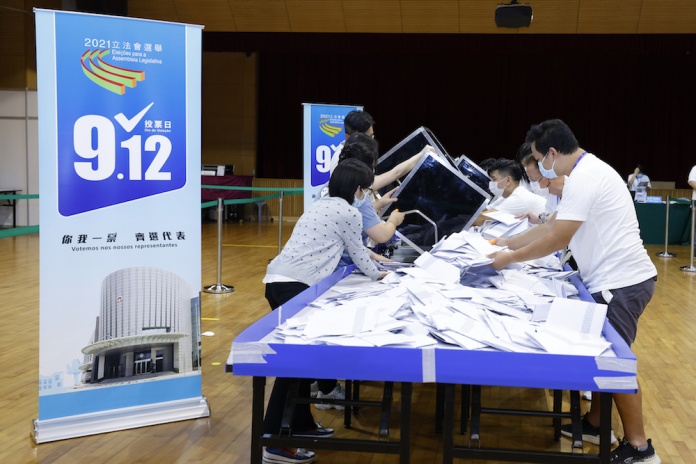 In the lowest turnout Legislative Assembly election in the Macau SAR history and the absence of most pan-democratic candidates, most votes fell to candidates connected to the traditional community, labour and public sector associations but with some surprising falls and newcomers.

With just 128 candidates from 14 electoral lists taking part in this year’s AL election, for the first time, six tickets managed to elect two or more candidates. Meanwhile, seven new faces will be added to the plenary.

However, surprisingly legislator Agnes Lam failed to regain the seat she won for the first time in 2017 with 9,590 votes after her Civic Watch list fell short of the necessary vote ceiling with just 3,729 votes.

The Macao United Citizens Association managed the highest vote tally of the election night, more than 26,593 votes or about 20 per cent of the total, and repeated the feat in 2013 when the Fujian community-linked group managed to elected three candidates.

Incumbent legislators Si Ka Lon and Song Pek Kei were re-elected, with Lei Leong Wong – the youngest elected candidate on the race – to join in the new legislative assembly session for the list backed by business heavyweight, Cham Meng Kam.

The Union for Development collected some 23,760 votes with the association connected to the Macau Federation of Trade Unions (FAOM) re-electing incumbent legislators Ella Lei Cheng I and Leong Sun Iok.

Without Mak Soi Kun this time around, the Macao-Guangdong Union gathered 16,808 votes and managed Zheng Anting re-elected as a legislator, with the list connected to the Macau Jiangmen Communal Society also electing banker and Vice-President of the community association, Lo Choi In.

Having served in the AL since 2005, Jose Pereira Coutinho will again head for the AL after his New Hope list gathered the highest vote tally in its history, more than 18,232 votes, and managing to elect its second candidate, public worker Che Sai Wang.

Both candidates linked to the General Union of Neighbors Association of Macau (UGAMM) were elected legislators for the first time.

Despite breaking her previous successful partnership with UGAMM, incumbent legislator and nurse Wong Kit Cheng will return to the plenary after the Alliance for a Happy Home garnered about 14,232 votes.

One of the biggest surprises of the night came from the Power of Synergy list, with Ron Lam U Tou to head for the first time to the plenary after the list managed a record-best final vote tally of 8,763.

A former FAOM Social Affairs Deputy Director, Lam graduated in environmental sciences, worked as a journalist, and headed the Choi In Tung Sam Association where he conducted several studies and surveys on public policies, with an emphasis on housing.

Only 42 per cent of the total 323,907 registered voters cast their vote on the election date, the lowest rate reported since the establishment of the Macau Special Administrative Region in 1999.

Electoral Affairs Committee Chairman, Judge Tong Hio Fong, attributed the low turnout to the Covid-19 pandemic and to the “very hot weather on Sunday and the occurrence of thunderstorms” generated by typhoons impacting the region.

After the disqualification of 21 election candidates by the EAC prior to the elections, a considerable question mark remained to whom the votes previously gathered by disqualified candidates would fall.

The EAC decision to disqualify the legislators – 15 from the pan-democratic field – was justified on evidence provided by police authorities that they did not uphold the Basic Law of Macau or pledge allegiance to the Macau SAR, a decision later backed by the Court of Final Appeal.

Some voters have previously pointed to the unprecedented disqualifications as a factor impacting the atmosphere surrounding the election and contributing to the low turnout.

The Legislative Assembly comprises 33 legislators, 14 chosen by popular vote and 12 who win seats through indirect suffrage, plus seven appointed by the Head of Government after the elections.

In a ‘no surprise’ election with 12 candidates for 12 available seats, the indirect election ended with an 89 per cent voter turnout, with a total of 7,000 ballots cast.

Former directly-elected legislators Ho Ion Sang and Angela Leong On Kei were elected this year to the AL via the indirect election route, with the Vice-President of UGAMM elected via Social services and educational sector, and the gaming businesswoman elected via the Education and Sport Sector.