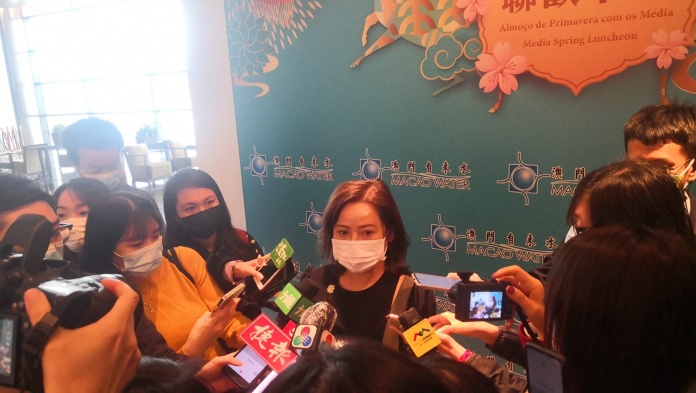 The profits reported by public utility company Macao Water Supply Company Ltd decreased by some 20 per cent year-on-year in 2020 to about MOP70 million (US$8.7 million) as the Covid-19 pandemic led to a reduction in consumption, the company’s Executive Director, Nacky Kuan Sio Peng, said today (Wednesday).

The city’s pumpage dropped by 8 per cent year-on-year last year to some 93 million cubic meters – the highest drop ever – as the pandemic slowed down the local and global economies, a reduction mainly caused by a reduction in consumption by the local large hotel properties, said to represent 20 per cent of total water consumption.

However, household water bills are expected to remain the same.

With rainfall levels in Guangdong and Southeast China considerably lower this winter, the Macao Water Executive Director assured supply in the city was assured thanks to reserves in the Zhuyin Reservoir.

Macau is entitled to a 40 per cent usage of the water from the Zhuyin reservoir in the Pearl River Delta, which amounts to 16.05 million cubic metres of water.

According to the Chinese Ministry of Water Resources since October, 2020 rainfall in regions south of the Yangtze River had been 50 to 80 per cent lower than normal, and about 2.4 million people in the provinces of Zhejiang, Guangdong and Fujian had already been affected by the drought.

The Marine and Water Bureau (DSAMA) had already informed Macau News Agency that it has coordinated and prepared various arrangements to ensure the safety of water supply together with the mainland China water conservancy department.

“We will cooperate with Zhuhai authorities [concerning any possible water shortages]. For the time being, we will still use water from the Zhuhin reservoir. It’s a quite stable supply,” Kuan added.

Meanwhile, the Seac Pai Van Water treatment has started supplying water to the outlying islands since early this year, with the new infrastructure, in connection to the 4th Raw Water Pipeline having increased the local water supply from 390,000 to 520,000 cubic meters per day.

The company is planning to introduce smart water services in the future housing developments at reclaimed area New Zone A, including automated reading systems and water quality online sensors.

“We will be able to know the water supply situation in Zone A and the data will go to our central control room in real-time,” Kuan noted.

The public company is also discussing a possible water recycling programme at the University of Macau campus this year.