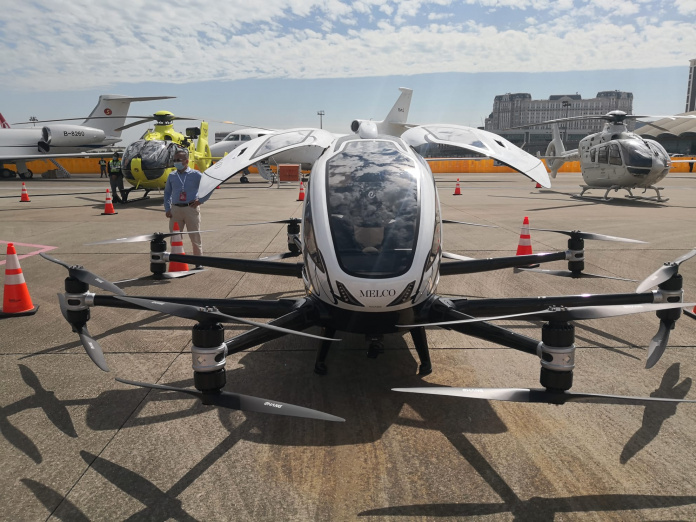 It can hold two people, with a maximum weight capacity of 260 kilogrammes and capable of reaching a maximum 160 km/h speed, and can be charged
by 220V or 380V power supply in 1 hour.

The aerial vehicle has been authorised for uses as diverse as sightseeing, aerial taxi services, logistics transport, transport of organs for human transplants and firefighting.

The EHang self-driving aircraft has completed multiple test flights around the world in 10 countries across Asia, Europe and North America, including China, the United States, the Netherlands, Japan, South Korea, Qatar, Austria, Canada, The United Arab Emirates and Estonia.

EHang announced previously that its autonomous electric vertical takeoff and landing vehicle would carry out test flights in the Greater Bay Area as part of a new exploratory partnership, with trial flights conducted with Heli-Eastern, a low-altitude charter helicopter company that operates in Shenzhen.

The EHang vehicle on display at the Macau exhibition has been previously included in Melco Resorts’ TheArsenale’s pop-up flagship store at City of Dreams.

The 10th Macau Business Aviation Exhibition will last until November 12 with more than 100 aircraft on display at a 24,000 square meters exhibition area set at the Macau International Airport.

Organised by Nam Kwong, the exhibition expects to attract 200,000 visitors, including nearly 6,000 industry guests and more than 40,000 professional buyers.