The largest gaming industry fair takes place here this month. And an exhibition where producers of casino equipment reveal what they are launching on the market. So, it is appropriate to speak of one of the biggest nonsensical situations that has come to be fed by malicious individuals.

A few years ago, someone started the rumour that the local government forbade the advertising of gaming equipment. From slot machines to other software destined not for sale to the general public but to the industry itself. Conveniently, such advertisements allegedly prohibited in some media were, however, accepted in others – the so-called industry media.

This is patently silly – and only ignorance can lead to such fears. But the truth is that the fashion caught on. Which only shows how lack of knowledge fuelled by the unfounded fears of those who think that local government is devoid of rules makes Macau a place still feared by investors.

The government has never banned such a thing. If it wanted to, then the Legislative Assembly would have to change the current gaming law that does, in fact, allow this kind of publicity.

What is advised against is the advertising of casino games per se: the act of gambling and its promotion. For example: ‘Come and play at Casino X because it is here you can make the fortune of your life’.

If one day the government has the intention of prohibiting the advertising of gaming industry equipment it will certainly not make any distinction between the media.

It is advisable that the people who come to this city inform themselves, because, like this lie many others are fed by ignorance, fear and indifference.

With some pomp and circumstance we learn that Chief Executive (CE) Fernando Chui Sai On has signed an agreement with the Bank of China (BoC) giving residents better access to BoC facilities.

Under the terms of the agreement, Macau residents can now use their resident identity cards as a form of accepted identity for opening accounts, handling cards, registering or trading using financial services for around 500 overseas branches of BoC.

All very nice and certainly important. But I for one would prefer BoC use its resources to improve its service to the public here. Queuing at the bank’s sub-branch in San Ma Lou is incomprehensibly terrifying. All three times I needed to be served I gave up after waiting for more than an hour.

BoC leads the ranking of banks in the MSAR. And pockets more profits. It should bet on introducing faster, more efficient services. And certainly no-one would complain about an upgrade in the number of employees serving the public in a timely and professional manner.

It is terrifying to note that a taxi driver ran over two ladies and a two-year-old. It is equally terrifying to see that a citizen decided to punch an elderly man because his young grandson might have had an altercation with his son. The blow struck allegedly led to the death of the old man.

Are both the taxi driver and aggressor guilty of reckless, irresponsible and probably criminal actions? No doubt. But the main responsibility – as we are tired of saying – lies with a government that insists on betting on a culture of punishment rather one of education.

The Secretary for Security can put as many video cameras on the road as he wants and the police can conduct alcohol tests. Driving at speed and drunkenness increase the severity of acts, if proven in court. But the truth is that in most cases there is no speeding or alcohol in the blood when similar incidents occur.

Authorities continue to think that a trampling at 60 kilometres per hour kills infants less than an 80 kph hit. What kills is ignorance. And the dearth of education campaigns – consequent, effective – are equally criminal. Unfortunate events that should force the people in charge to respond as co-defendants.

Great business on the prowl

Many of the main local figures are linked, directly or indirectly, to civil construction.

For years the new El Dorado of urban renewal has been underway. Imagine the trillions of patacas to be gained from the renovation of a large part of the city.

We can anticipate some great fortunes to sharpen the teeth before such an appetising cake, and it will be interesting to see how the various powers position themselves on the political chess table. So much so that there are names that have refused to take up public nominations because they have more to gain doing business. With the right guanxi.

We can only hope that responsibility will finally triumph and that much of the pervasive monkey business that has historically been tolerated will decrease considerably. In the name of the collective interest. Clearly, we are not optimistic . . . 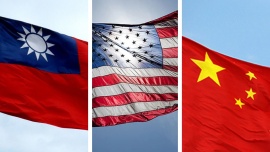 April 17, 2021
Judging from the political context and context of the visit of a delegation of former...

April 17, 2021
Could Macau be an alternative to Hong Kong as a financial hub? It may seem...
Load more