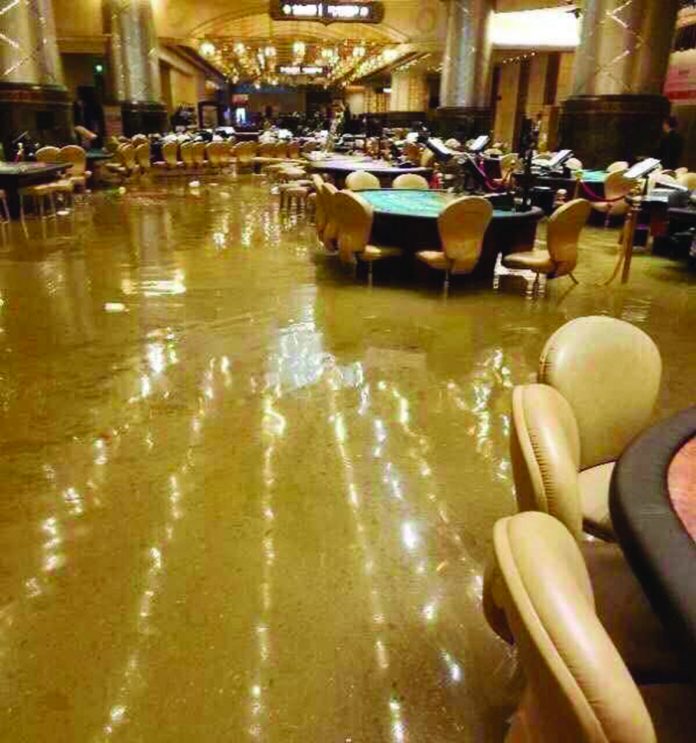 Macau (MNA) – Casino workers would still be obligated to go to work during a Typhoon Signal No. 8,  but employers are also legally bind to compensate for eventual damages resulting from a labour accident under such circumstances.

Gaming rights activist Cloee Chau of the New Macau Gaming Workers Association told Macau News Agency (MNA) that this is a contractual matter, which gaming workers are obliged to respect.

A Super Typhoon, Mangkhut, is making its way to the South China Sea passing by and causing havoc in the Philippines on Friday night and Saturday. It is expected to affect Macau on Sunday, with authorities considering hoisting Signal No. 8 or No. 10.

The World Meteorological Organisation had stated that, in terms of the strength, Typhoon Mangkhut is the strongest tropical cyclone of the year.

According to a recent statement jointly released by the Gaming Inspection and Co-ordination Bureau (DICJ), Macao Trade and Investment Promotion Bureau (IPIM,) and Labour Affairs Bureau (DSAL), employees will be entitled to labour insurance, and gaming companies are obligated to provide safe working conditions, although there was a lack of specific information on what safe working conditions entail.

MNA has contacted DICJ on further details regarding the conditions gaming workers would be subject to during a typhoon but received no reply at the time of writing.

According to Alexandre Miguel Bastos, a lawyer working for Rato, Ling, Lei & Cortés,companies are legally obliged to transfer the eventual responsibility to compensate for damages resulting from a labour accident to authorized insurance companies following 2015’s revision of the legal framework for the insurance related with labour accidents and occupational diseases.

In a written reply to MNA regarding the legality of the matter, Mr. Bastos explains that this would apply for accidents if they occur ‘in the direct way and in any direction of the roundtrip between the employee’s house and his work place, when the employee performs it during a flagged signal 8 tropical storm, or higher, issued by the Meteorological Services, and within a period of 3 hours before the work time start or 3 hours after it’.

It would apply to both residents and blue card holders, according to the lawyer.

However, Mr. Bastos points out that while there is a contractual obligation for employees to respect shift timings, employers have to ensure that workers will be facing safe work conditions, particularly in the area of transport as workers might face greater risks travelling to work during typhoon occurrence.

‘Within these and among other, the labour department recommends that the employer should, if possible, provide the transportation.’ Mr. Bastos explained.

Bastos also  said that it is the opinion of the Labour Affairs Bureau (DSAL) that if the employee misses work or is delayed due to extreme climate, absence of the employee should be justified, meaning that employees have the right to refuse work.

However, Mr. Bastos acknowledged that without any specific circumstances described, the theme was ‘open’, although workers can consider working in a typhoon as operating under dangerous circumstances.

June 30, 2022
The United States on Wednesday announced an agreement with Pfizer and BioNTech for 105 million...