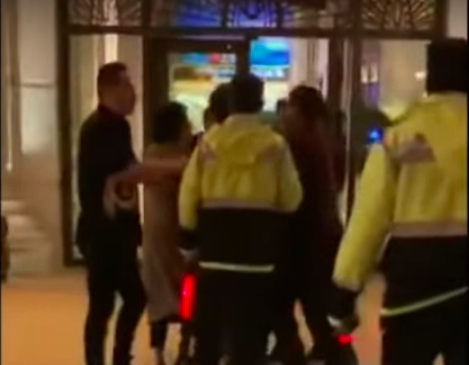 Macau (MNA) – A security professional told Macau News Agency (MNA) that traffic and security personnel outside the Galaxy Macau property in Cotai were improperly trained an unprepared to deal with the incident that led to a police officer shoot a warning shot after being assaulted by three Mainland Chinese men, and that they should’ve assisted the officer to defuse the situation.

On January 3 in the Diamond outer lobby of the Galaxy Macau, a Public Security Police Force (CPSP) officer was assaulted by three Mainland Chinese men after they were told that they were smoking in an unauthorized area, forcing the officer to fire a warning shot in the air to quiet the attackers.

According to Ekraj Rai, Managing Director of local security company OMNIRISC security, footage of the incident seems to show that the security personnel outside the casino were not just unprepared to deal with the situation, but actively blocked the PSP officer from performing his job.

Footage of the incident shows the presence of traffic management personnel (in yellow vests) outside the property – responsible for making sure the traffic to and from the property goes smoothly and if people are walking in the right direction – trying to control the scuffle, with two Galaxy Macau security employees (in red uniforms) at one point also joining the altercation.

“When the officer was involved in the incident there were I think six security employees there, according to the video. Basically they did not stop it, they just stood there and were actually blocking the security officer to perform his job. It should be the opposite, they should be stopping those people […] In some jurisdictions they would be arrested for obstructing a police officer,” he indicated.

In some instances of the incident, the security personnel even seems to be telling the police officer to “calm down”, with their focus seeming to be to protect the guests instead of the officer, Rai added.

“Management always tells security that you have to be nice and polite to clients and to not upset customers […] Here you can see the security officers supporting the clients more than the officers,” he added.

The number of security personnel was also said to be enough to control the three assailants and if they were not, they should’ve asked for backup from “some of the hundreds” of security in the property, Rai told MNA.

According to the security expert, the police officer “had no choice” but to take out his firearm, taking in consideration that he was outnumbered by much larger assailants, and having already tried to control the situation through warnings and by using his baton.

“If using the firearm was professional has to be seen taking in consideration the PSP internal guidelines and regulations since different police forces in different jurisdictions have different guidelines on the use of force,” Rai added.

After the incident PSP indicated that an internal investigation was on-going to assess if the firearm use by the officer was adequate.

Nevertheless the security professional told MNA that in that situation the property security personnel should’ve cleared the area of civilian standers-by, to prevent someone possibly being shot.

“When someone draws a weapon, you clear the crowd. Basically they were not prepared at all. All these people were making videos and some of these people could’ve been injured. [Those people] should’ve been cleared,” he added.

The security professional has worked in the security of several casinos in Macau and indicated that every security department has conflict management response training or policies and procedures in the case of fights and arguments, that should be transmitted by the Galaxy Macau in-house personnel or to any outsourced security company.

“They have this sort of training but they should communicate this to the outsourced security as well. They were not aware, trained or advised [for the situation]. Their roles and responsibility were limited to traffic management,” he said.

Mr. Rai also remembered that not that long ago, this property was involved in a crisis management and action co-ordination drill involving all security departments in the city, and that maybe some of that knowledge could’ve been used for this instance.

MNA contacted Galaxy Macau to inquire if the traffic management security personnel or security employees were in-house employees or employees from an outsourced security company, inquiring also what are the standard procedures when dealing with physical confrontations in the property.

Representatives from the property indicated they would issue a response to MNA, although the response had not yet been received by the time this article was published.

Traffic management personnel in the property involved in the scuffle and shown in the video were using yellow uniforms by local company Southern Security Services (Macau) Ltd.

MNA contacted the company to inquire on the issue and its guidelines for dealing with possible violent incidents, but the company refused to even reveal if it provides security to this Cotai property.

Following the incident, Secretary for Security Wong Sio Chak said that authorities would study the possible future use of alternative law enforcement methods, such as pepper spray.

“It’s a good tool to have. Most law enforcement around the world have used tear gas or pepper spray. How [local police] uses it is up to their internal guidelines. I’m sure they will be properly trained,” Rai added.

PSP told MNA that after investigations were concluded the three arrested Chinese men – holding a PRC Exit-Entry Permit – were transferred to the Public Prosecutions Office, to face charges of aggravated harm to bodily integrity, aggravated insult, resistance and coercion, disobedience, robbery and sabotage.

One of the men remained in police custody, with the other two fined MOP50,000 (US$6,196) and released but still having to report to authorities.

The three men could be punished with a maximum sentence of five years in prison.

May 24, 2022
A crescendo of calls from hundreds of noisy jackdaws can often be heard right before...

May 24, 2022
The average earnings excluding bonuses of full-time employees in the Macau SAR financial sector have...
Load more