Macau (MNA) – The demolition project of Sin Fong Garden will “soon” begin, the Director of the Land, Public Works and Transport Bureau (DSSOPT) Li Canfeng said on a sideline of a press conference on Tuesday, confirming that the Bureau had recently issued the demolition permit and approved the reconstruction plan of the building.

In 2012, at least 140 homes in the Sin Fong Garden residential building in Patane were evacuated after one of its supporting pillars collapsed, threatening the whole structure. The residences have been sealed off ever since.

Although the problematic residential building is still undergoing judicial procedures, the DSSOPT head claimed that related departments are finalising the procedures.

Li said that the demolition would be challenging given that the building itself is relatively tall, hence the department is currently still looking for the best technical approach to demolish the building.

February 23, 2021
Nine women suspected of plotting to blow up military targets in the restive southern Philippines... 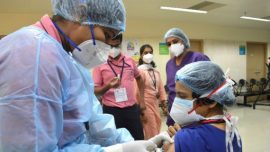