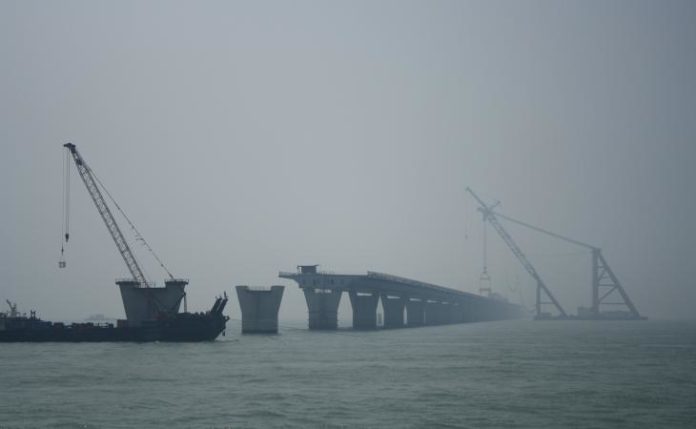 Macau (MNA) – As of today, the total cost in charge of the Macau SAR for the construction of the main section of the Hong Kong-Zhuhai-Macau Bridge (HZMB) amounts to some RMB2.57 billion (MOP3.12 billion/US$388.29 million), the Infrastructure Development Office (GDI) clarified this Tuesday.

The initial bridge construction was estimated at RMB38.11 billion, with the shared amount to be paid by the governments of mainland China, the Hong Kong SAR and the Macau SAR set at RMB15.73 billion. The GDI said further that the remaining costs would be paid ‘by credit,’ but did not provide details about the share of loans to be contracted by each region.

It was also agreed that each one of the three governments would cover its own costs for the construction of border checkpoint facilities and access links between the bridge and their respective territories – including the artificial island in the MSAR side – with the cost value of those infrastructures not being included in the shared RMB15.73 billion.

In accordance with the financing ratios of the three regions, the MSAR contribution was set at 12.59 per cent of the capital or around RMB1.98 billion.

However, due to the ‘impact of the rise in labour and material prices, readjustment of the design and implementation programme, among many other factors,’ the overall total cost to be paid was increased by RMB10.35 billion to RMB 48.46 billion.

Taking into account the original percentage defined – that is, 12.59 per cent – the governments of the three regions will currently have to support some RMB4.68 billion of the extra amount, with the GDI now clarifying that the MSAR will pay an extra value of more than RMB590 million.

The HZMB includes three bridges and a tunnel spanning through 55 kilometres, with the main bridge cutting across mainland China’s territorial waters.

Initially slated to be completed in 2016, the super bridge is expected to be concluded by December 31 this year.