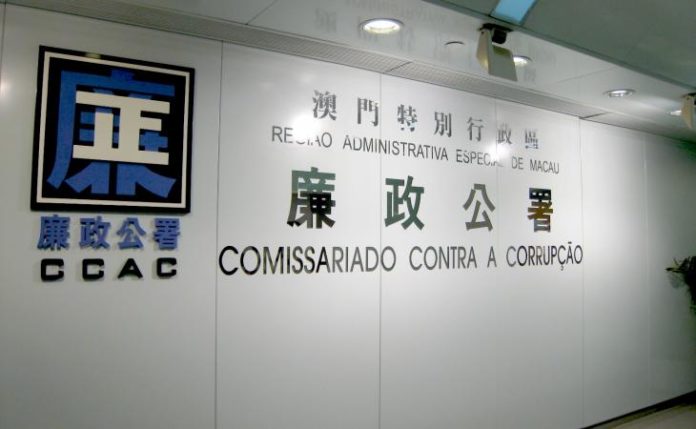 Macau (MNA) –  The Commission Against Corruption (CCAC) released a report this Monday lambasting the Macau Trade and Investment Promotion Institute (IPIM) for lack of stringent vetting in its approval and checking mechanisms when granting temporary residence permits for ‘major investment immigration’ and ‘technical immigration’.

‘This not only easily gave rise to the situation of attempting to obtain temporary residency through making fictitious investments, but also, to some extent, caused the ‘major investment immigration’ policy to deviate from its original legislative intent that aims to foster diversifications of Macau’s industries through attracting significant inward investments,’ the CCAC report indicated.

Between 2008 and 2017, a total of 410 people have obtained temporary residence in Macau through 186 major investment or major investment plan applications, with some 5,376 management personnel and specialised technicians obtaining residence for their professional skills.

According to CCAC, the department has received several complaints questioning the legality of the vetting and approval procedures, criteria and decisions; and that in certain situations temporary residency was being obtained through ‘fake investment, employment, academic qualifications and Social Security Fund contributions’.

The Temporary Residency Regime for Investors, Management Personnel and Specialised Technicians was approved in 2005, allowing non-residents to apply for temporary residency through ‘major investments’ or by ‘purchasing real estate’.

Management personnel and specialised technicians employed by local employers can also apply for temporary residency, but with residence through real estate purchase being discontinued in 2007.

Due to doubts about the procedures, CCAC launched an investigation in December, 2015 into the IPIM residence scheme with the results published today.

When it comes to residency through major investments, CCAC noted that prior to 2015 IPIM had internal guidelines setting MOP1.5 million (US$185,614) as a minimum reference for a residence candidate, a minimum that was raised to MOP13 million starting from November, 2015.

However, of the 186 authorised residence applications, 15 per cent were connected to investments of less than MOP1.5 million.

The two lowest accepted investment applications involved an amount of as low as a MOP142,376 investment in a production company, with another being a MOP379,686 investment in the shares of a laundry company.

‘The investment amounts were, in fact, not huge. In addition, the investments were placed in traditional businesses such as performance production, goods purchasing, laundry, money exchange and travel agency instead of the fields that the SAR Government strives to develop, such as high-technology and cultural and creative industries,’ found the report.

The department also noted that in some cases a single investment project was the basis for application by different investors and that actually there were only 131 investments in the successful 186 applications.

There were six cases in which a single investigation project served as the basis for four different applications for temporary residency, for businesses such as hotel investment, construction, sales of digital products and catering.

As an example the report cites a MOP6 million investment in a an investment and trading company running a business of retail and wholesale of stainless steel and construction materials that served for four different residence applications, and since the scheme also allows family members of the applicants to be included, a total of 18 family members were granted temporary residency in Macau.

The CCAC also noted that a large proportion of the investment amounts in some of the projects were related to real estate with most of the amount considered in the investment being for expenses of purchase or rental of immovable property and refurbishment of operation facilities.

In fact, 11 of the investment projects’ applicants that were granted residence between 2007 and 2018 were actually real estate for investment and development companies.

In some cases, investment plan applicants knowing the importance IPIM gave to immovable property investment when processing the applications would purchase property, submit the property registration with the company name to IPIM for residence permit renewals and obtain temporary residency with ‘fictitious investment projects’.

In one case, two sisters applied for residence through two investments of MOP2,920,500 and MOP2,623,500 for establishing an electronics import and export trading company.

‘The information show that they bought an office unit and a residential unit, respectively, and claimed to IPIM that the office unit and the warehouse served as the office and warehouse of each of their companies, respectively. However, the CCAC found in the investigation that they had purchased the units together with lease contracts. The units continued to be leased out since the purchase and were never used as the office and the warehouse of the company,’ it found.

The sisters also submitted the property registration to IPIM as proof that their project was going forward and for renewal of their residency.