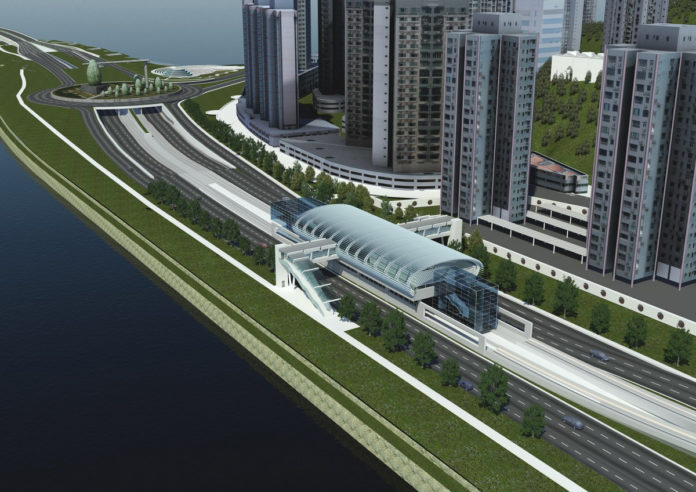 Macau (MNA) – With all eyes set on the opening of the Taipa LRT line in 2019, this year saw the local government suffer some blows to the project in the form of a court order that revoked the initial LRT depot in Taipa contract and through a scathing Commission of Audit (CA) report criticising the major delays and budget overrun incurred by the by the Office for Transport Infrastructure (GIT).

Nevertheless, contracts were granted by authorities for the maintenance and operation of the Taipa LRT and contracts for the foundation and preliminary works of the Seac Pai Van  line and Barra station were awarded.

January started with the revelation by the Urban Planning Committee that the New Area Zone A would include underground and overground LRT lines.

However the true surprising announcement came two months later in March, when the Court of Second Instance indicated that the MOP1.07 billion (US$132.7 million) contract granted to China Construction Engineering (Macau) Co./Companhia de Engenharia e de Construção da China (Macau) Limitada for the construction of the superstructure project of the LRT depot in Taipa had to be revoked, works suspended and the contract awarded to a new company.

However, claiming re-bidding the project could cause further delays to the opening of the Taipa LRT line, Macau government decided to maintain the contract with the winning group, with no information on what compensation could be provided to China Road and Bridge Corporation, the company that according to courts should have won the initial bid.

Some estimates predict that the smallest of the lines included in the Taipa and Macau LRT project could maybe only be finished by 2024.

In April a MOP5.88 billion deal with MTR Corporation Ltd. to provide services for the operation and maintenance of the Taipa LRT line for the first five years, with the new public capital company to be created taking over afterwards.

In the same month Secretary for Transport and Public Works, Raimundo Arrais do Rosário, indicated that public subsidies to be allocated to the LRT system will be larger than the amount currently provided to public bus transportation at some MOP1 billion per year.

In May, GIT has terminated a contract worth about MOP360 million with Mitsubishi Heavy Industries to purchase additional LRT trains, with the initial contract predicting the supply of 48 carriages.

In July the GIT Co-ordinator, Ho Cheong Kei, revealed that ticket prices for the future Taipa LRT will probably be slightly higher than bus prices, while MTR starting the hiring process for local LRT employees.

In August the Legislative Assembly (AL) Follow-up Committee on Public Finances that the public company to be created to manage the Taipa LRT will have three shareholders, with the Macau Government to own 96 per cent with the Industrial Development and Commercialization Fund (FDIC) holding 3 per cent of the company and the  Science and Technology Development Fund (FDCT) holding the remaining 1 per cent.

In a surprising announcement the Commission of Audit (CA) released a report in September criticising the major delays faced by the construction of the LRT project by the GIT and estimating that the completion of the project would cost more than MOP51.2 bln, with all short-term projects to only be fully completed, at best, in 2026.

The GIT then responded that the delays and over budgeting of constructing the LRT were due to the lack of experience in related infrastructure construction in Macau.

In November the AL voted and rejected a proposal by legislators Ng Kuok Cheong and Au Kam San to establish a specialised committee to investigate the LRT project. If passed the committee would be able to invite the Chief Executive and current and former secretaries for Transport and Public Works to the AL to respond to legislators questions on the project.

Some large announcements concerning the LRT in 2018 waited for the end of the year, with some new information pertaining to the Seac Pai Van line and the Barra station projects revealed in December.

In the last month of the year the GIT indicated that preparatory works for the Barra LRT station were almost concluded, and that the construction of the station itself will soon be initiated, as Secretary Rosário revealed that the total cost connecting the Taipa line to Barra station would be around MOP4.5 billion, with the connection to be finalised by 2024.

During the Policy Address Legislative Assembly Q&A session for Public Works, the Director of the Land, Public Works and Transport Bureau (DSSOPT), Li Canfeng, also revealed that the future underwater tunnel connection between Macau and Taipa will have six lanes and with an LRT line.

In December, the GIT also revealed that the public tender for the main construction project of the Seac Pai Van LRT line will open in early 2019.

The final bill for the LRT regulations is also still being evaluated at the AL committee level, with legislators raising doubts over the power held by LRT inspectors and over the lack of details on future constructions included in the project.