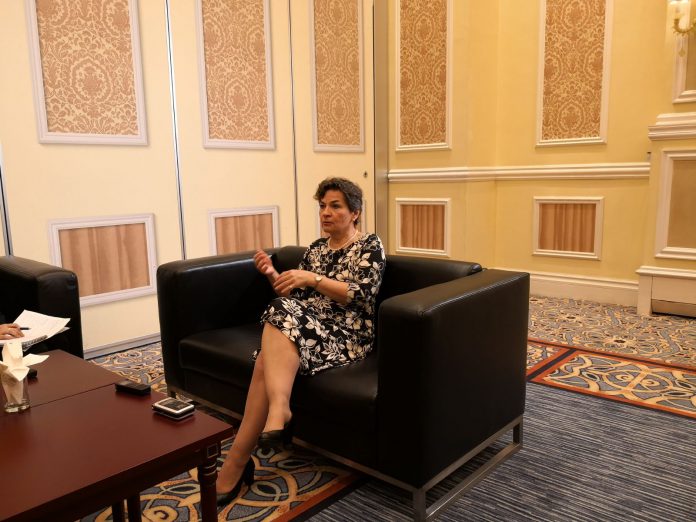 Macau (MNA) – The former Executive Secretary for the United Nations Framework Convention on Climate Change, Christiana Figueres, said on Friday that the high number of tourists coming to the Macau SAR impacts its environmental policy since it is “more difficult to affect tourism behaviour than that of the citizens that live in your city.”

“That’s why the environmental changes in Macau need to be systemically introduced and not depend on individual human behaviour,” she told reporters at the 2018 Macao International Environmental Co-operation Forum & Exhibition (MIECF).

Nevertheless, Mr. Figueres considered that the city had the potential to become a “leading world eco-city” if it maintained its efforts to clean up the emissions on transportation, reducing one-use plastic, and improve the quality of its water.

Figueres further considered that having a small area was also an advantage to the city, since its per capita carbon footprint is lower than cities with the same number of residents, but spread in a larger area that requires more transportation.

“The more concentrated the population is the less fuel intensive transportation it needs and the more you can rely on biking, walking and shared transportation,” she argued.

With Chinese authorities having banned the import of 24 categories of solid waste for recycling from outside the country, including from localities such as the Macau and the Hong Kong SARs, the environmental expert considered that local authorities should look to control over the entry of plastic in the city.

Mr. Figueres suggested that every country or city that used to export its plastic waste to China should implement a price for consumers who choose to use plastic bags, a policy that has led to plastic use reduction in several countries.

She also suggested that food waste – which represents the majority of waste produced in the city – should not be seen as waste but as energy or fertiliser that can be used productively, recommending at the same time that local gaming operators make a joint effort to tackle food waste.

“Due to their high concentration in a small area, there is an opportunity for local casinos to become the leaders of the world’s gaming industry on how to deal with food waste,” Ms. Figueres added.

“The good thing about these challenges is that luckily nowadays there are many good reasons to actually tackle the problem'” the expert stressed. “It certainly makes sense on an environmental point of view because the absence of good waste management is incredibly polluting, particularly in a small area.”