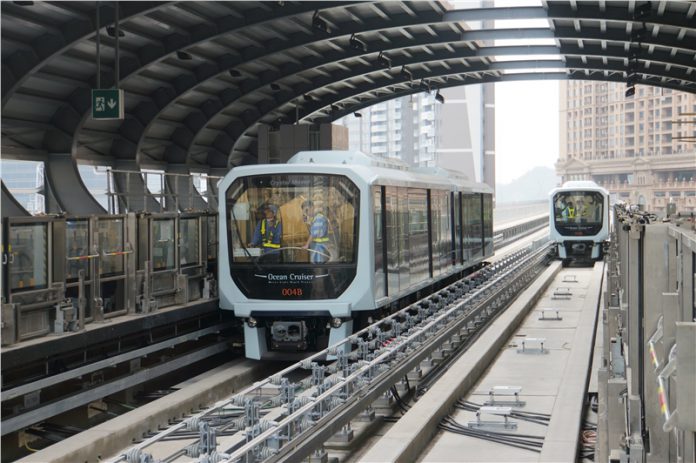 Macau (MNA) – The first phase of dynamic tests of the Light Rail Train (LRT) has been launched on the Taipa Line tracks.

According to the latest information on the development progress of the LRT released by the Transport Infrastructure Office (GIT), the first test was conducted between Ocean Station and Pai Kok Station on March 29.

The dynamic test was launched after static tests had been conducted to check the status of various equipment operations including brakes, doors, carriage illumination, and alarm systems, to name but a few, when the first batch of LRT trains had been received in the Macau SAR in the third quarter of 2017.

The Office added that the delivery and testing works of the LRT trains are being conducted progressively and that the first phase of dynamic tests will be arranged on the track consecutively.

The first phase of tests comprise examining the connections between trains and the signal system, as well as the Automatic Train Control (ATC).

The second phase entails the circulation of trains on different tracks, and running tests with different speeds and control models.

The GIT said it expects the dynamic tests to be concluded at ‘the beginning of next year,’ which will be followed by system integration tests in line with the goal of having the Taipa Line operational in 2019.