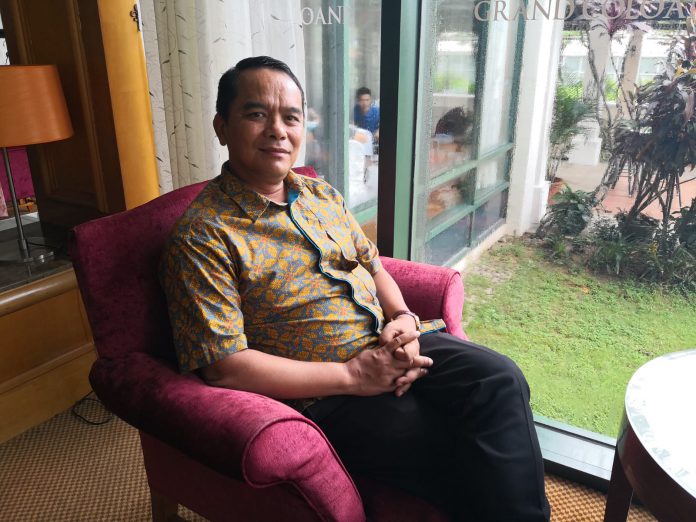 Macau (MNA) – The Consul General of the Republic of Indonesia for Hong Kong and Macau, Tri Tharyat, told Macau News Agency (MNA) that Indonesian workers should be mandated to register their data and work contracts at the local consulate in order to protect them from possible scams, abuses and other incidents.

“In Macau they don’t need to come to the consulate to get their contracts approved so it’s not easy for us to detect and put them all in our database. The protection issue has been very challenging. We don’t even know how to contact their family in Indonesia,” said the Consul.

According to the Consul, such registration regulations have worked well in Hong Kong and Taiwan and implementing this measure locally would increase the Consulate’s capacity to protect local Indonesian workers, who today celebrate Indonesia’s National Day.

“There are many cases in Hong Kong, with a recent unfortunate case of an Indonesian worker who died due to falling tree branches. A few hours after that we could contact the family because everything is in the database. It’s something we don’t see in Macau yet,” he noted.

According to Mr. Tri, the Consulate normally only collects information on Indonesian workers when they come to the office to request assistance on issues such as passport renewal – around 250 applications per month.

Tri, who assumed his post on September 1, 2016, said “there were many challenges in how we improve relations between Indonesia, Hong Kong and Macau” during his term.

“For Macau I have seen a lot of untapped potential operations that I’ve been exploring so far. There are still many things we can work on together. We have more than 5,000 Indonesians living in Macau, half of whom are domestic helpers and we need to pay attention to how the two sides, Indonesia and Macau, can protect them better,” he stated.

The Macau SAR Government is currently evaluating a bill concerning new regulations for employment agencies at committee level, with one of its Articles proposing local employment agencies be prohibited from providing services to non-residents in the city, either on a tourist visa or even with a work permit.

The Consul believes the law could provide a better framework for protecting Indonesian workers – despite him personally or his office not having been consulted on the matter – since agencies would collect data that could be provided to the Consulate and local authorities.

According to Mr. Tri, some of the common issues for which Indonesian nationals request assistance from the Consulate concern problems with their employers, and fake job scams.

“Last year, we handled 95 mixed cases [concerning] Indonesian workers [being duped by] fake advertising for jobs in Macau. They come and the vacancies are not there. There was a crime syndicate working on this type of [racket] and last year we helped nine victims of a scam like this,” he noted.

The Consul stated further that his office continues to urge Indonesian nationals to cross-check with the Consulate before coming to Macau, with the office working with the Macau authorities in taking these cases to court.

“Normally, the perpetrators are not in Macau but in Indonesia, so we push [for prosecution] from the Indonesian side. It’s not easy; sometimes the victims give up when we ask them to go to the police station, it’s something challenging to ask,” he said

“Of course, the rights and obligations of these workers and employers should also be clearly mentioned in that law,” he added.

The Consulate also assists Indonesian convicts incarcerated in Macau – currently nine – with the office also providing a temporary shelter, a three-bedroom apartment, for Indonesians in need or in distress such as those who are involved in legal cases, who have just left prison or have been victims of crimes.

However, Mr. Tri specified that the shelter could not be used for Indonesians who are waiting for their visas or whose visas have been revoked.

Another issue pertains to the lack of an estimate of the number of Indonesian migrant workers Macau would need, something the Consul believes could be attained with improved communication with the Labour Affairs Bureau (DSAL).

Hong Kong authorities have previously estimated that the city would need 240,000 new domestic workers in the next 30 years to cater to the needs of its aging population.

“I’m in constant dialogue with the Hong Kong labour authorities,” he said. “I don’t have this with Macau yet. Of course, I met with the labour office last year but since then the dialogue has not been that good. It’s something we need to work on more.”

The Consul indicated that even Hong Kong’s Chief Executive, Carrie Lam, gets involved in discussions on how Indonesians can contribute to the city, something yet to happen here.

Putting it on paper

Another issue Mr. Tri thinks should be addressed is the minimum wage for migrant workers, especially domestic helpers, and its inclusion in contracts, together with insurance.

Nevertheless, the Indonesian Consul stated that he did not want to compare which SAR offers more advantages to Indonesian workers.

“Although in Hong Kong they have stay-in rules, here it is flexible […]. As far as I know,  most Indonesians in Macau live outside their employer’s home. In a sense, it might make their life happier,” he concluded.