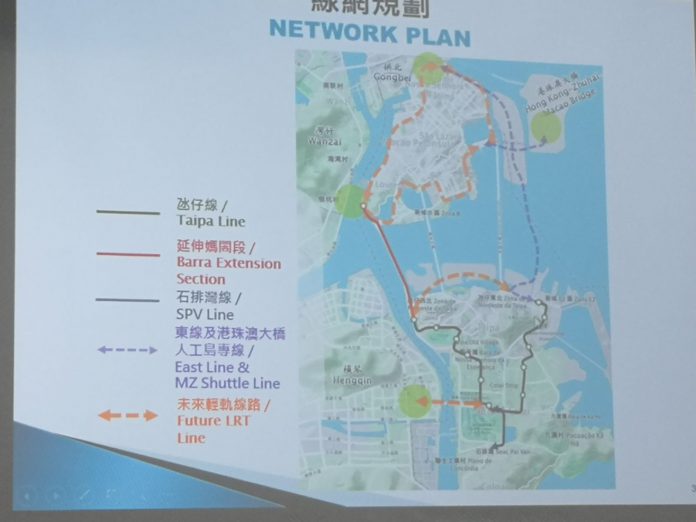 Macau (MNA) – The Macau SAR Secretary for Transport and Public Works, Raimundo Arrais do Rosário, said this Wednesday that public subsidies to be allocated to the Light Rail Train (LRT) system will be larger than the amount currently provided to public bus transportation at some MOP1 billion per year.

While responding to questions at a seminar held at the University of Macau, the Secretary said the system would need considerable government support due to being planned to run for 24 hours per day and to the expensive train cars it requires.

The MSAR Government announced today it will pay MOP5.88 billion to the MTR Corporation Limited – which runs the metro operations in Hong Kong – to provide services for the operation and maintenance of the Taipa Line of the LRT. The operations are to be managed by a future public company that will oversee the transport system.

Meanwhile, when questioned if the system would only bring benefits to tourists and not local residents, the head of the Office for Transport Infrastructure (GIT), Ho Cheong Kei, replied that the benefits provided by the Taipa Line “might not be very large,” adding, however, that “you can’t say there won’t be no benefit at all”.

“The LRT will be the main transport method and it will be complemented by bus routes to create a public transport network,” said Mr. Ho. “It goes through the major airport, the Lotus Border checkpoint and some part of the line pass through residential areas near the Jockey Club and Taipa Stadium, major housing areas. So if residents want to go to the airport, it will be very convenient and more punctual.”

Government representatives also stated during the seminar that no decision has yet been made on the ticket amount to be charged to users of the LRT, claiming, on the other hand, that the system depot superstructure is already “80 to 90 per cent completed.”