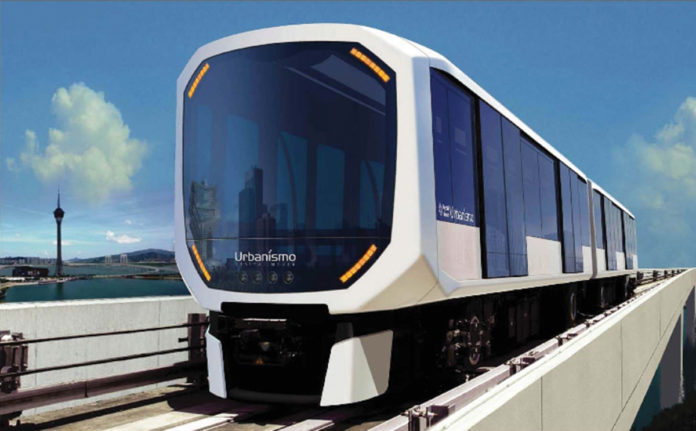 Macau (MNA) – The Macau Government has revealed to the Legislative Assembly (AL) Follow-up Committee on Public Finances that the public company to be created to manage the Taipa LRT will have three shareholders.

The Macau Government will own 96 per cent with the Industrial Development and Commercialization Fund (FDIC) holding 3 per cent of the company and the  Science and Technology Development Fund (FDCT) holding the remaining 1 per cent.

This corporate structure was chosen in order to follow the Macau Commercial Code regulations for joint stock companies, which demands a minimum of three shareholders, with the two funds chosen due to their ‘strait ties with other companies connected to the LRT development’.

The MSAR Government has signed a MOP5.88 billion (US$727.2 million) deal with MTR Corporation Ltd. to provide services for the operation and maintenance of the Taipa LRT for the first five years of operation.

The Transportation Infrastructure Office (GIT) is to be restructured and incorporated in the new LRT public capital company, becoming the oversight body of LRT management.

The report also stated that the Macau Government has disclosed to the committee that the 81 per cent of the MOP16.4 billion – the most recent budget estimated for the LRT, excluding the Macau Peninsula line – has already been adjudicated.

Since the LRT project budget has almost quadrupled from MOP4.2 billion in 2007 to MOP16.4 billion this year, the committee indicated that the budget will ‘certainly’ increase further in the future.

According to the committee report some MOP9.8 billion of the MOP11 billion budget for the LRT Taipa line had already been adjudicated, with the government ‘confident’ that the final expenses will not exceed the proposed budget.

The government indicated that preliminary works for the Barra LRT terminal are expected to be completed in the third quarter of this year, with main works to start in the last quarter.

Preliminary works for the Seac Pai Van LRT line were initiated in May of this year, while the main works for the Taipa line are said to have already been concluded, with the opening deadline still set for 2019.

The Taipa LRT carriage depot – which featured in a court dispute between the Macau Government and an applicant for the original tender – was said to have already been handed to the carriage supplier for the installation of equipment.